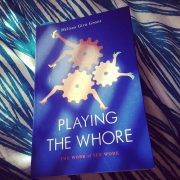 Undercover cross dressing is the result of an understaffed investigations team in desperate need of more female employees, so like it or not, it’s part of the job.  The task was going to be a doozy.  With prostitution being legal now, someone in your city was going around harassing the working girls in very unpleasant ways.  He still hadn’t been caught even after his hunting grounds were mapped and monitored.  Somehow, he managed to slip past you guys every time.  Enough was enough.  It was time to send in some agents.

Undercover cross dressing; This is where things get weird…

Ten locations had been selected to post an agent at dressed like a working girl.  The trouble?  There were only nine available female agents.  One of the men were going to have to fill in, and you picked the short straw.

“Dude, it is what it is.  You’ve got the most…feminine figure,” one of your colleagues said as every single one of them snickered.

Your clothes were chosen for you, and someone has some really sick taste.  But, before getting to that, you had some manscaping to do.

“Ahh!” you cry as another strip took away the last of your leg hair.

“Sorry, hun, but it all has to go.  On the plus side, from the waist down, you could easily pass for a woman.”

You begrudgingly agreed with her statement in the back of your mind.  As your transformation took shape, the man in the mirror was becoming less recognizable, and a new, unfamiliar hottie was emerging.  They used the best quality blond wig to bring out the little cock sucker in you, and your make-up was equally trashy.

You stare at a strip of fabric someone insisted was a skirt and slide it on.  It barely hid your cock, and you felt a breeze in the back.  Some clever adjustments up top would get you to pass for an A-cup, and the 6-inch heels soon felt like a pair of old friends, even though you’d never hear the end of how quickly you acclimated to them.

It was show time

But then you saw it; the green SUV.

“Potential suspect incoming,” someone stated into your earpiece.

It matched the description the woman gave perfectly, and it pulled right up to you.  Your heart raced as you smiled and bent over to see a man twice your size in the driver’s seat waving a fifty at you.  The MO matched.  The girls said he’d flash what he was prepared to pay for something simple.  You knew the team wasn’t far away, probably running the license plate while you kept him busy.

But he was getting impatient with your time-wasting efforts at his window.  If you didn’t act like the whore you were playing as he could get spooked and run.  You took the chance and got in his truck.

He wasn’t wasting any time.  He didn’t even bother driving someplace private.  His massive, veiny cock was already out and wreaked of a hard day’s work.  You had no choice.  Until there was confirmation, you couldn’t bust him.  So, you might have to…bust him.  You open your mouth and taste the salty, sweaty cock.  Getting to work, you start to pump your mouth, and you hoped for some type of medal for this when suddenly..!

Just as those words rang through your head, a hand pushed down on the back of it.

Because he had no intentions of letting you out of that car until he was satisfied, your lips remained firmly planted on that dong.   He was paying good money for your mouth.  You may not earn a medal for this, but you would earn fifty bucks.