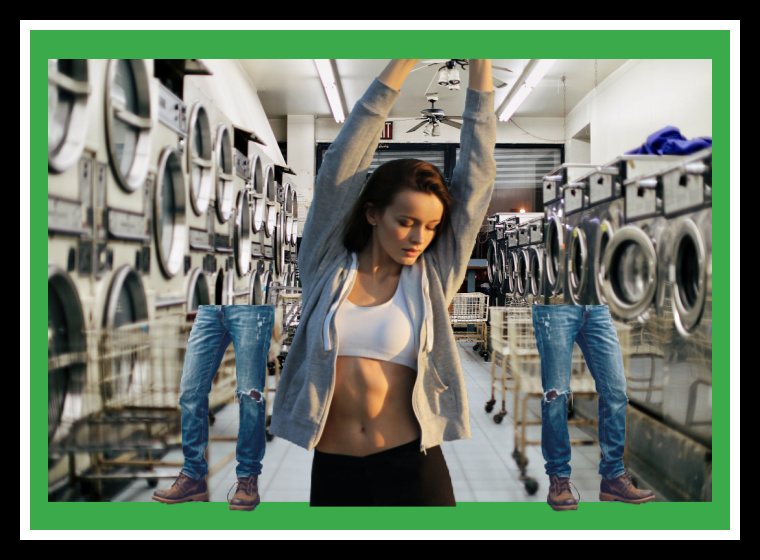 I had put off doing laundry for a whole month, so I had more clothes than normal.  I went on Wednesday because there is a half-price special on the washing machines even though that was my phone sex night.  Usually, I am the only person in the laundromat aside from the attendant, but tonight we were not alone.  I sorted my clothes, loaded them, added the detergent, and started the machines.

I walked into the bathroom to wash my hands, and before I could turn and lock the door, a man walked in behind me.  “Excuse me!  This is occupied!” I exclaimed.  I tried to say more, but he had jammed his tongue deep in my mouth, almost down my throat.  As he kissed me forcefully, he also was fondling my honey pot through my clothes.  Even though he was excessively rough, I was turned on by this encounter.  In fact, my clit was tingling, and my pussy became instantly moist.  The power that the pleasure had over me would not let me say “No” or stop him.  Before I knew it, I was on the bathroom floor at the laundromat with a stranger’s head between my thighs.

Engulfed in my own pleasure, I was unaware that there were two men in the bathroom with me now with my eyes closed.  As I laid on my back, one man was above my head stroking his hard-hanging schlong, and the other still had his tongue deep in my wet crease.  Above my head, the man motioned for me to open my mouth as he rubbed his bulbous head on my lips.  I opened my mouth, and he began face fucking me, causing me to gag and choke on his rod.  A few times, I was even gasping for air.  Just when I thought he was going to explode in my mouth, he got up, positioned himself behind the other man, and began thrusting his wet hard member into his ass.

He was fucking him so hard that he began to bite on the inner and outer labia of my pussy.  I did not even know that watching two men fuck would turn me on, but I was the wettest I had ever been.  My pussy was swollen and throbbing!  The feeling of pure ecstasy overcame my body, and I began to squirt all over.  At the same time, both the men began to ejaculate; there was slippery wetness everywhere.  I put my clothes on and left the bathroom.  The experience had me so frazzled that I did not even dry my clothes.  I put them in the laundry bags while they were still wet and went home.  Who were those men?  Were they a couple?  Another spontaneous threesome so turned me on. in an unlikely place!