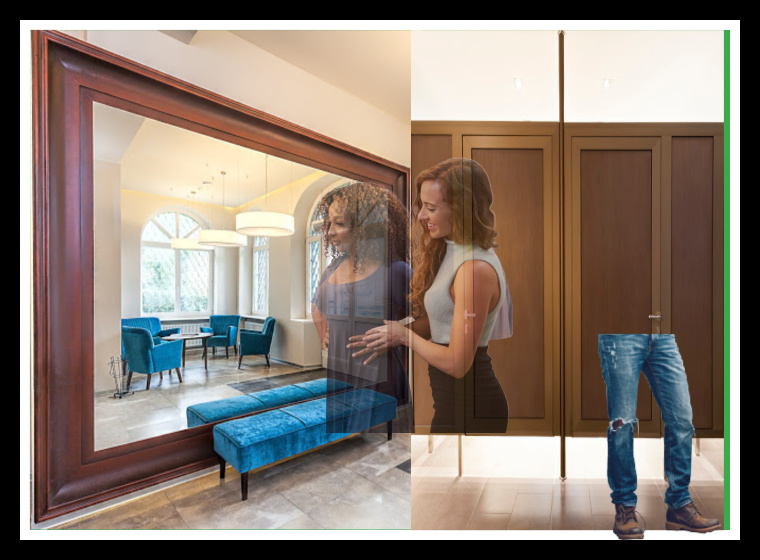 Most of the items that I tried on did not require a front and back view; however, one of the dresses I selected had a low cut back, so I needed to see it from behind.  I put the dress on and stepped out of my dressing room to use the mirror that gave me a nearly 300-degree view of myself.

As I look in the mirror, I hear a voice say, “Damn, you look Hot!”  I turn away from the mirror, searching for the source of the raspy voice yet deep and sexy.  I turned and looked over my shoulder to see a chiseled man sitting on the couch in the waiting area.   He was early to mid-forties, gaged by the salt and pepper beard he displayed.  He was wearing a pair of tattered, dingy, dark denim jeans, a jacket that looked like it used to match the jeans, and a button-down shirt with the first three buttons undone to show the hair on his chest that was also a mix.  “Thank you,” I finally replied.

Then there was a knock at the door.  I open the door to my dressing room, and in front of me stood/ a tall, thick, curvaceous woman.  “Bae, she IS sexy . . . Sexy as Fuck!  I’m sorry, I am trying on clothes in the dressing room next door.  My husband called to tell me that he saw a sexy, hot mamma, so I had to see for myself.  Damn, you’re sexy!”

There’s a knock at the dressing room door . . .

Before I could reply to the compliments that the mystery lady was spreading on so thick, she grabbed me by the back of my neck and planted a wet kiss on my lips with tongue.  All kinds of thoughts ran through my head, but her kiss made my clit tingle with desire, so I kissed her back.  Before I knew it, she had backed me up against the mirror inside the dressing room and was feeling on my tits that were exposed.  Then she slides to her knees, lifts one of my legs, moves my panties to the side, and starts sucking on my essence, creating a pool of moisture.

While overcome with ecstasy, the mystery man had joined us in my dressing room.  I had not noticed until I felt an extra pair of hands rubbing my ass.  Meanwhile, the mystery lady was ravishing my pussy from the clit all the way around to the crack of my ass, and it felt as though she had some help.

She finally took a break but only asked me to lay down on the dressing room floor.  As I laid down, the mystery woman did not skip a beat.  She got on all fours, putting her ass high in the air, and went back to licking my sweet snatch.  The mystery man had taken his shaft out of his pants and had begun stroking it while dipping his finger into her mouth of arousal; shortly after, I could hear it popping.

I got dressed and headed to the register to pay for the items that I selected.  Still flustered with a grin plastered permanently on my face, I could not wait to do a confession session with my favorite phone sex operator; she will never believe this really happened.  Every time I go shopping, I will be on the lookout for the Mystery Couple.  Will I ever see them again?

Did you enjoy this hot tale of erotica?

Read other blogs that I have written, like The Long Rite of Passage!