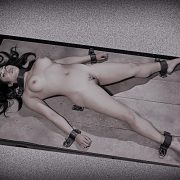 Hello again, my sexy perverts! It’s been a while, but today I finally bring you the third part of my “Owned by the Boss” story. Did I mention that a real-life man inspired this story? He was (and still is) a senior leader in a large corporation.  All the ladies in the office whispered about how handsome and charming he was. My boss jealously predicted that the board would soon appoint him as the new CEO. Which he was, I recently heard. Apparently, nobody ever complained about his propensity for staring at women’s breasts. I know I never minded…

Now, back to the story…

“How do you like me so far?” he asked. I wasn’t really sure how to answer that. I thought that I liked him – his looks, his charm, his overwhelming sexiness. But this is not the guy I fell for back home. Not at all. So far, all this guy had done was order me around and take my clothes away from me. And cause me pain and leave me tied up, crying and begging all night while he completely ignored me.

But I couldn’t ignore the fact that my pussy had been dripping wet and I’d been more turned on than I’d ever been the whole time I’d been there. So, that’s what I told him. But what I didn’t say was that it pissed me off that he tricked me and lied to me.

I was a little intimidated by its size

Of course, my first question to him was “what things would I be getting used to?” He answered this question by unzipping his jeans and pulling out a very large cock. Then he moved closer to make sure that I could get a good look at it. He asked if I liked it. I was a little intimidated by its size and the aggressive way he introduced me to it but I was afraid to say no. “Yes, I like it,” I answered.

“That’s good”, he said, “because you will be worshiping this cock now. It will be the primary focus of your life and you will learn to love every inch of it. Basically, it will be your god. And with that, he pulled me to the edge of the table with my head hanging off upside down and without any warning told me to open my mouth and shoved his big cock down my throat. I had never given a blow job to anyone so big before and he gagged and choked me with his size and aggressive thrusting down my throat. He had his hand on my throat and I think he was rubbing the head of his cock through where it distended my throat. This wasn’t a blow job it was a dominant, aggressive throat fucking.