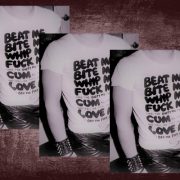 I wanted his big hard cock down my throat

I was a bit disappointed when Julian’s tone became more business-like. And I didn’t understand why he just spent several hours seemingly trying to charm me when he just wanted to offer me a job. Whatever techniques he had been using worked very well, that’s for sure. Because I was already intensely attracted to him and I was imagining him balls deep in my pussy later that night. A promotion would have been nice but his big hard cock down my throat would have been nicer.

I still have a hard time believing what he had proposed. It was very much outside of my comfort zone or even anything I even knew much about. It was all at once exciting, a huge turn on and also very scary. But I’m getting a little ahead of myself. The first thing he offered me was $50,000 dollars to spend a long weekend at his home. I couldn’t imagine why he would feel the need to pay me since I obviously would have done absolutely anything sexual that he wanted me to do. In fact, most girls would have. But, he told me, I had to agree on a few rules:

You were expecting a private jet and a limo? This isn’t that kind of story

As instructed, I had no luggage with me and only my handbag. Julian met me at the door and as soon as I walked inside he ordered me to strip and hand me all of my clothes. He also took my handbag and my phone, saying that I would get it all back when I left. At the end of all that I was wearing nothing but my black high heel pumps which I was to wear at all times.

You were expecting a dungeon? This isn’t that kind of story.

He pulled up a chair and took a seat so he could talk to me. But before he said anything, he caressed one of my round perfect tit with his big hand. It was the first time he had touched me and it felt so good despite my awkward situation. My nipple was immediately erect which he acknowledged by pinching it between his thumb and forefinger very hard. I yelped in pain and tried to move away when he tried to do it again but of course, I couldn’t. I very quickly gave in to him and let him do it again. And, as I’m sure you expected, my pussy was dripping wet. Looking back, I think he was testing me.

Next up – Did he leave me chained to a table for a really long time? Did he fuck me really, really hard first? Probably. This is that kind of story.

And if you want to hear more about phone sex, need a bit of my own special brand of sex therapy or anything else just call me for the best phone sex you will ever have…