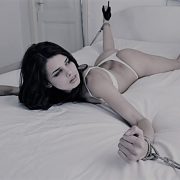 I had never met the CEO but I knew he was good looking, in his mid 40’s and quite charismatic as most CEO’s are. I was unprepared, though for his almost electric excitement and energy.  You could feel from the moment he entered the office. As the leadership team, myself included, settled into the conference room I couldn’t take my eyes off of him. He was even better looking in person than on our website. He clearly worked out and took care of himself. And his prematurely mostly silver hair was just devastatingly handsome. We all listened to him say nice things about the branch and the managers and talked about goals for the next few quarters.

Next, each department manager stood up and gave a short presentation about their team’s accomplishments.  I was really glad that I chose business-slutty rather than business conservative when I dressed that morning. When I got up for my presentation, I was very aware of how I looked.  I wore a tight, black pencil skirt, white blouse with buttons that I opened to show the perfect amount of cleavage and black pumps.

The rest of Mr. Lucas spent the rest of the day in meetings with people higher up than me. After my team had left, I was still in my office finishing up for the day. Suddenly I felt the electric presence again. I didn’t even need to look up to know it was Mr. Lucas standing in my doorway. But this time he was alone, without his entourage of Vice Presidents from the corporate office.  He didn’t seem to need an invitation from me to come in and have a seat.

My first thought was that he smelled impossibly good

Hermes maybe? It was hard to tell. He got right to the point and asked me to go to dinner with me. He said we could meet downstairs in 30 minutes.  That gave me just enough time to fix my makeup and hair, put on thigh highs and get ready for a fancy dinner. I assumed that he was inviting me to dinner with a small group of office leaders, and thus the personal invitation. But I was wrong.

When I got into the limo downstairs, it was just him and me. The chemistry and electricity were almost too much to take. I don’t think I was able to say two words during the mercifully short ride to the restaurant. For the first 99% of dinner, he was flirty, charming and even kind of romantic in a way.  This guy, I remember thinking, can do whatever the fuck he wants to me.

So my sexy perverts, what do you think this proposal will be? I bet you can guess…