My most pathetic submissives are made into a human toilet. 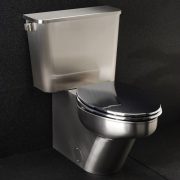 I have a very special place for my most pathetic, loser slaves as my human toilet.

A human toilet is exactly what you think it is! I make this man do one of the most strenuous, dirty jobs of all my household appliances. Not only is he an object, but he is the dirtiest, most bottom feeding appliance. These submissives are creepy, weird and disgusting to me. There is only room for these worms in one place in my life, underneath my toilet seat. The best that they can ever expect to experience is consuming my filth. They better damn well appreciate it as well. That is my creation and the most of me that they are allowed to enjoy. They will worship every little bit that they are given! They will choose it over their own air!

I will make them hold it in their mouth to savor the taste! I first began using men as toilets when I had this slave that I just found absolutely disgusting. He was a repulsive, repugnant, and a total cockroach. Not only did he smell, but he was such a fucking mouth-breather. Mouth breather or when he did breath through his nose, a nose whistler.  I felt like was always lingering so close, like just to be close to me. Like he was breathing on me, or sniffing me. He fucking gave me the heebey-jeebies and he made my skin crawl! I always yelled at him to keep his space because I thought that he was going to give me lice, or like some sort of infection. Plus, he stunk.  Didn’t he realize that I was a pristine little princess?

How could he willingly risk spreading his filth to me!?

I knew that he was gross because he did gross things. I could make him lick my soiled shoes after I had intentionally stepped in dog feces on the way in. He would do what do whatever the fuck I told him to, no matter the task. I decided that I wanted to test a theory I had on him. I really did not want him touching me (like for massaging) or touching my things (like for task work), so I was left with few options with what to do with him. It was either this or discard him. I already drained him of every bit of cash. He desperately told me that he would do anything for me. Then told him that he could be my human toilet and he immediately took the job.

I decided to test my slave as soon as possible. I drank orange juice, tea, and a coffee right away. The minute I needed to relieve myself, I demanded that he run to the toilet, lift up the seat and lean his neck back. He looked at me like he wanted to sneak a lick of my pussy, so I placed the toilet seat right on his neck, thus keeping his chin in place. I plopped down on the seat an immediately released my urine all over his face. He gurgled as he tried to swallow as much urine as possible. He earned his new place as my human toilet.

Do you like fetish phone sex? How about a bullwhip for punishment? check out more of my blogs!

2 Replies to “My most pathetic submissives are made into a human toilet.”