A scat eating fetish is not my favorite, but everyone has their price! 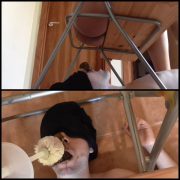 Have you ever thought about a scat eating fetish?

I mean, what would it take for you to partake in someone’s scat eating fetish, really? I was faced with this decision when I looked for sex work online. During this time, I encountered this quirky old man who was quite the sniveler if I must describe him. He spoke about a million miles per hour and typed up these scattered paragraphs that read as redundant and often landed at about two pages long.  God, he was weird. He spoke in long breathy sentences with very little direction. And he spoke with such intensity but mumbled at the same time. He could certainly keep up the appearance of a normal human being, surprisingly. Kind of nerdy, but kind professional as well. This weirdo convinced me to meet up with him, with the only he would ever get me to partake. Money.

In order to get me to participate in this barbaric activity, he asked me how much it would take, to get me to shit on him. I felt repulsed, but I knew this man had money. How much was worth me shitting in this dudes mouth? I decided that the exact amount for me to take laxatives (one of his conditions), squat over this man’s face in a bathtub, spread my cheeks and release myself into his mouth, amounted to 6,000 dollars. He agreed to the amount and we agreed on a date. He sent me 4,000 upfront over PayPal. That morning as instructed, I ingested nothing but liquids and one laxative. A nice little yogurt smoothie, and then minestrone soup for lunch. As the night approached, I got my large male friend to drive me to the hotel.

He stood outside the hotel to make sure that no funny business went down outside of the activity agreed upon.

I knocked on the door and there he stood, about as creepily as possible wearing nothing but a pair of tidy-whiteys and snorkeling goggles. I walked in and asked where/how he wanted to go about doing this. He just pointed to the bathroom and walked in there, expecting me to follow. I trailed behind. In this nice, clean, expensive hotel bathroom the only thing that appeared out of place was a huge stained funnel. This piglet climbed into the tub, leaned his head back and then popped the funnel into his mouth. I pulled my panties down and mid-squat told him that he must send me the remaining 2,000 or I would stop.

His hands shaking with excitement, or nervousness or whatever, he sent me the money and leaned back again. I spread my ass and moved over the funnel. Finally, I let him have it! I felt it exit my body and fill the funnel heavily. Once I finished, I cleaned up and only glanced at the decreasing levels of feces in the funnel for a moment. I couldn’t watch the rest. As he swallowed the remainder, I walked out. His scat eating fetish gave me the heebie-jeebies, but definitely worth the money.

Call me for some humiliation phone sex! Read more of my blogs if you want to hear what I do to my human toilet.