The best way to ensure obedience is to use a bullwhip for punishment. 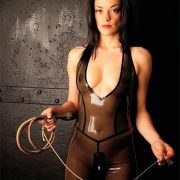 Using a bullwhip for punishment sounds out of the question.

A bullwhip for punishment is not that harsh. Not if the punishment fits the crime. Never doubt me; it is the biggest lesson that one of my subs can learn. You may ask questions in a sense, but what they are not to doubt, is what my capability is. If I threaten you, do not take it lightly. It means that you must do as I say, or you will be punished. If I say that I will punish you for disobedience, you better believe that you will receive that punishment to the fullest of that threat. Never test me. However, the proper thing to come from such disobedience is a grand learning opportunity. I highly doubt that I will see any testing by him a whole lot after that.

I told him to lay down face flat on the bed. He said me no, defiantly, out of pathetic humor and male pride. Nothing infuriates me more than stubborn male pride. Take me seriously. I stepped directly on his foot with my sharp heel and leaned into it. As he bent over to cope with the pain, I grabbed him by his hair and forced him onto the bed. With a hand in his hair, I used my other hand to bind his arms together above his head to the headboard. Then I tied his feet together and to the footboards. Now before you feel any sympathy for this weasel, he asked me what would happen if he just refused to make my bed. He was to make my bed twice a day, three times if I napped that day, among the rest of his assigned chores.

Apparently, I didn’t punish him enough.

He thought that he could start slacking and test my strictness. I told him, that should he knowingly chose to disobey me, to provoke me or question me, then I would be so insulted. The offense would be worthy of a bullwhipping. He laughed. I told him he would not find it so funny when I whipped him. He insisted that I wouldn’t do it. I came home and found the bed unmade, just as he had suggested before. Once this bitch was all tied up and rendered entirely helpless, I pulled out the bullwhip and shoved it directly in his face.

He started begging and promising that he would behave, but he needed to face the consequences of his actions. I told him that his punishment was worthy of seven lashes. He began to struggle. I struck him once with it, gently, only leaving a thick dark red welt. The next four lashes broke the top layer of flesh. The last two were warnings. I threatened to toss salt on it, but he seemed like he received the message loud and clear. I let him up. Do not cross me or you will get my bullwhip for punishment.

If you like humiliation phone sex call me! If you’re curious about nipple torture, read more of my stuff!

2 Replies to “The best way to ensure obedience is to use a bullwhip for punishment.”