I once fucked this girl who was into nipple torture, and not just clamps! 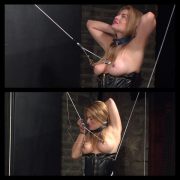 Has the concept of nipple torture crossed your mind?

She also had a piercing that was a spike directly through her bottom lip. In her free time, she had mentioned that she bought a piercing kit and pierced people without a license. We talked for quite some time about everything. She told me that she had a boyfriend who was slightly over twice her age and that she made him shave his asshole before she did a bunch of crazy stuff to it. She was several years older than me, but I have always been quite mature for my age. We began discussing things that we enjoyed in the bedroom. She told me that she was VERY kinky, and I assured her that I was too.

We arrived at the topic of nipple sensitivity, and I informed her that my nipples often felt very sensitive.

She told me that she did not like anything gentle to do with her nipples. She said, “You practically gotta yank ’em to get me to feel anything.”  Then, I told her that I appreciated the giving side of that situation more than the receiving end. This resulted in her asking me if I wanted to experiment with her. She told me that her limits were burning and anything that would result in permanent scarring or damage. I bound her hands behind her back like I knew how, with rope separating and lifting her bare tits. Then, I laid out a plate of sterile needles to play with along with some pretty aggressive looking metal clothespins. As she sat on my bed, I used the first needle on the outer edge of her left tit. The puncture penetrated only the superficial layer of the skin.

I proceeded to line her tits with these needles all across. Then, I placed the clamps three at a time on each nipple. I watched her tits turn a slight purple, and light red began to trickle down. She just sat there and ached until I decided to release her from her pain. Finally, one by one I slid them out. As I removed the clamps from her tits, marks and selling arose from where the pinching occurred. Nipple torture was quite the experience.

One Reply to “I once fucked this girl who was into nipple torture, and not just clamps!”