One of the most freeing sensations is bondage and suspension! 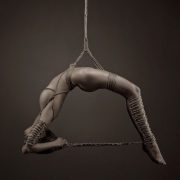 Have you ever wondered what it would feel like to experience both bondage and suspension?

Have you seen/ attended any of those bondage and suspension classes and wondered what it feels like to be the person suspended from the ceiling after getting wrapped in rope like a mummy? I have a friend who lives in Las Vegas, and when I visited, we tasted all of the things my gross little podunk town lacked.  I met this guy at a BDSM sort of meet and greet. He was considerably older than me, probably double my age. He apparently ran a studio where he taught classes on bondage and rope art. I thought this was incredibly neat and inspiring, so I asked him if it was alright if he showed me. He told me to swing by later that night and he would show me!

I found him quite attractive in a mature way. He had a thick German accent and a booming voice to match it. His hair fell in curly blonde locks and his face hidden behind a mysterious layer of five o clock shadow. What an intimidating man! As I approached what seemed to be his studio later that night, I hoped that a kidnapping situation wouldn’t arise in my near future. I watched him through the windows as he waved and ventured downstairs to unlock the door for me. As I walked upstairs, I realized how beautiful and professional his business was. He immediately told me that he was going to tie me up and fuck me.

His blatancy excited me.

He ordered me to strip and I followed his order. He left for a moment and then reappeared with several bundles of rope. Beginning with my chest, he knotted around and in between my tits, separating them. Then he wrapped the strings behind my back and then bound my arms and hands there. After, he slipped the rope down and between my asscheeks and then up in between my pussy lips, later attaching it to the chest portion. This guy had this like, gridded ceiling thing. All of the walls had mirrors. The floor had the smoothest light colored wood. It looked like a dance studio. Japanese art covered the remaining exposed parts of the studio. He took several of the ropes from the ceiling and looped them through a part of the chest piece that he made me.

Then he preceded to loop it through many other areas along my front. After this, he slowly hoisted me up until I dangled from the ceiling at the height of his crotch. He tied my legs up to the rigs in the ceiling and so they pointed upward but remained separate. Then he pulled out his cock and rubbed it all over my exposed pussy. Then thrust into me and began pounding me. He held me by the hips and he pulled me into him over and over. I felt so liberated. When you absolutely lack control while you receive penetration. He filled me with his cum and left me hanging there for forty-five minutes, just watching me. This bondage and suspension experience never left my memory.

Call me for some fetish phone sex! Read more to hear about me using a bullwhip for punishment!

2 Replies to “One of the most freeing sensations is bondage and suspension!”