Town bicycle invites everyone to her wedding…everyone. ♕ 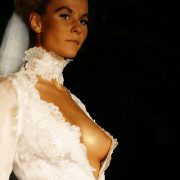 Town Bicycle is engaged…to you!

Town bicycle and marriage just don’t go together, but it was love at first sight when you saw her.  She was young, beautiful, charming, and funny.  She ticked all of the right boxes off.  Having just moved in, you had no clue about her past, and she was vague on the details.  When things started getting serious, she confessed and warned you that she had a past.  Being the love-blind idiot that you were, you insisted you didn’t care.  In hindsight, maybe you should have heard her out.

You’re a working man, of course, so you’ve got to do what you’ve got to do.  That’s understandable.  However, every man you ask will tell you never to leave a girl like her alone.  A simple trip to the post office might lead to bumping into an old fling and blowing him in the bathroom for old time’s sake.  A standard yoga class might end with a pussy full of cum from the guys who only go to those in order to get laid.  Without even knowing it, your girl was sucking and fucking everyone while you were dutifully bringing home the bacon.  The only clues you had that something was up was the various snickers you occasionally heard behind your back and the creamy taste her pussy had acquired when you ate it at night.

How does one go about asking one’s fiance if she’s a town bicycle?

Especially if you’re tongue-deep inside of her, tasting her pussy but also potentially other men, too.  If this was cum you were sucking up, how many different loads were there?  Three?  Thirty?  Hell, that’s what made it home.  Imagine her fucking so many guys in one day that she actually had to squat and squeeze the first batch out in order to make more room.  That was the thing.  You couldn’t stop imagining it.  Your cock always felt like a rock every time you thought about all of the studs parking their cocks inside your future wife.  Sure, it was embarrassing, but you couldn’t help it.  She needed constant fucking at night.  It was naive to think she’d sit at home and patiently wait for her fix.

So your cock isn’t microscopic, buuuut…

…you know this town is full of bull cocks.  After hitting the gym, you’re always greeted by a not-so-shy guy who thinks of towels as more of a suggestion in the locker room.  You’re forced to shower next to and make conversation with horse cock after horse cock idly swinging back and forth.  Teasing you.  Taunting you.  Your future wife casually comes up as the back and forth motion of those swinging dicks hypnotizes the beta in you.  You might not be gay, but you have that desire to do whatever they ask…including sharing a few nudes of your wife.

They didn’t believe you when you said you had some

You had to prove that your sexy fiance would trust you enough to let you have a nude or two. However, a hand takes the phone from you and the situation turns against you.  Before you realize it, all of the guys are crowded around it, pushing you back.  You keep hearing “oh fuck!” and “damn!” as they flip through your phone.  Without you knowing it, they start to text some of the pictures to their own phone before the original phone-snatcher in question approaches you.

“Godamn, she’s hot.  One question though.  Did you take this one?”

He holds the phone up to your face and you see her spread on a hotel bed.  You know you didn’t take it, but you lie and say, “uh yeah, dude.  Totally.”

He smirks and leans in.  “No you didn’t…because I did.”

You swallow.  Caught in a lie.  A pretty major one, too.  What REAL man would lie about his cheating woman to cover up the fact that she’s a town bicycle?  So now he knows you’re a bitch now.  What’s going to stop an alpha like him from just taking her right in front of you?  Nothing.  That’s what.  Are you reading this knowing that you too are just a little bitch?  Call my phone sex line and confess.