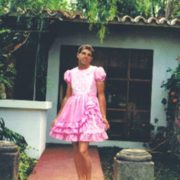 I hadn’t seen Alex for a few months as we were both away at college.  I was really looking forward to the Christmas break and catching up with him.  When I got home I raced inside to find a note from mom stating her and aunt Cass were out doing last minute Christmas shopping.  Yes! Quickly I dropped my bags in my room and raced next door.  I didn’t bother knocking and just ran straight to Alex’s room.  Throwing the door open, I rushed inside… and froze! Standing in the middle of the room was Alex, wearing thigh highs, panties, and a bra.

Quickly my mind raced back over the years we had spent together.  I slowly looked him over, head to toe.  Suddenly the long hair he refused to cut made sense.  His hollowed out cheekbones and plump lips that I thought were a combination of genetics and not eating nearly enough.  The skinny jeans and form-fitting shirts that, again, I thought were his attempt to be cool.  Suddenly all of the signs I failed to notice made sense!  Alex was a closet sissy boy!

“Please, Kassidy.  You can’t tell anyone.  Mom doesn’t even know I’m gay,” Alex begged.  Just then we heard the door slam and Alex’s eyes got huge.  I needed to think about this revelation further and because of this, I decided to cover for Alex.  “Fine Alex, I’ll go stall with aunt Cass while you finish getting dressed.  But you owe me one” I teasingly threatened as I turned to go talk to his mom.

I raced over to Alex’s house.  Making sure aunt Cass wasn’t home, I began to fill him in on the plan.  “This weekend, on Friday night, Veronica is planning a charity event and you’re coming with me,” I say.

“Kassidy, I don’t really think that is a good idea,” Alex replies.  He shifts nervously from foot to foot and I ask him what’s wrong.  “It’s been hard enough keeping my secret from mom and the family.  I really don’t think I can go out in public and although it’s just for a night, I can’t pretend to be something I’m not around all those strangers.”

Alex was still nervous and so I told him we could dress him in full drag.  I further suggested that he could wear a wig, makeup, and could go by a different name in an effort to protect his privacy.  “Alex, this is a great way to meet other people in the lifestyle.  The event can be a way for you to safely and freely express yourself.”  Alex still wasn’t sure and asked, “How about you?  How will I keep you from using this against me?”

I took a deep breath and then I said, “Alex, you are the one I am closest to in the entire world but I have not been completely honest with you.  As such, I have kept a secret from you too.”  I took a deep breath and then blurted out, “I’m not really a customer service rep for a credit company, I’m a phonesex operator.  So, there you Alex, now you have material which you can hold against me too.”