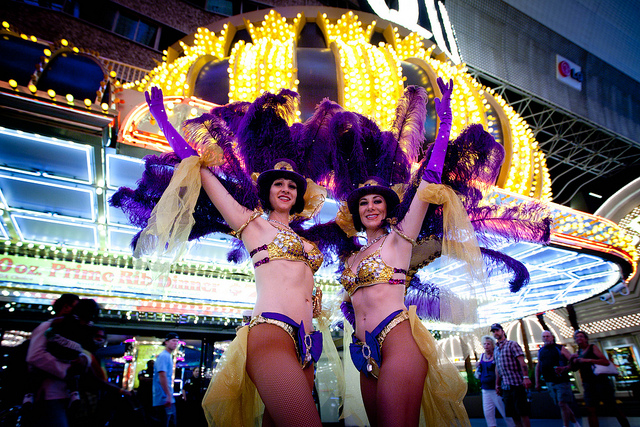 Show girls are some of the sexiest chicks in Las Vegas. They’re also some of the finest around in every sense of the word. Not hookers. Not escorts. Yet I was able to hook up with two of them in a casino bathroom. Call me a cheating wife if you want to.

I was walking down the strip sipping on some Jamison when I saw two girls standing around offering pictures with them. Mostly guys having their girlfriends take the shots. One was dressed in a shimmering bra and panties with armbands and a hat with a white boa that decorated it and silver platform stilettos. Clear platform and heel, silver straps. The other was dressed exactly the same but with gold and red.

So, feeling a little tipsy, I plopped myself in the middle of the two of them. Then realized no one was around to take my picture. So, I pulled out my phone and took a few selfies. I smiled and asked if they’ve had dinner yet. Since they were out here working so hard maybe they needed some food and drinks.

They politely refused. They couldn’t leave their post. So, what did London do? She brought some eatables to them. And, of course, liquor. So they ate. We talked and laughed until the end of their night. Some of the guys even wanted me to be in the pics with the show girls.

At the end of their night, I took them to the nearest casino where we had even more drinks. By about 4 am I had the both of them in the big stall of the casino bathroom. I let them keep their sexy outfits on while I just moved their panties aside and went from one girl back to the other, tasting their sweet juices. I stuck my fingers in both their holes and brought my fingers up so they could taste each other.

That’s not all we did. I know your cock is throbbing. If you want ALL the juicy details you gotta pick up that phone babe.