Sex In Public; Sex In The City, And I Mean In Public! 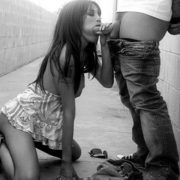 Sex In Public Always Turns Me On Like Nothing Else

A lot of people enjoy sex in public, I am sure one of them. Recently I went to New York City for a long weekend getaway and had a lot of fun. My first day there as I was having an espresso at a little sidewalk cafe, I met this hot guy. It must have been fate. There was no where for him to sit in the crowded cafe. I offered him the other seat at the table I was sitting at. He gratefully accepted. I told him I was in town for the weekend, he said he was a local. We talked for a good long while, and it wasn’t long until the conversation turned naughty.

Sex In Public Is So Hot!

He asked me if I ever had one night stands and I said I’d had a few, but didn’t make a habit of it. He said he loved to mingle with tourists and have fun with them on occasion and would I be game? What kind of sex did I like, etc. I said it was kind of naughty, but I enjoyed having sex in public.  The risk of possibly getting caught really heightened the experience for me.

He smiled and said he loved it as well. In New York City he said there was no shortage of semi public areas to have fun in. After we finished our espresso, we went through Central Park for a walk, finding secluded areas where there was privacy. There was also the chance someone else could walk on by any second. You just never knew.

He was hard again pretty fast, but said we should change locations in case anyone was watching we just couldn’t see. So we straightened our clothes and moved along and went to another area of the park. He was asking me how daring I was. I asked him why He said there was a spot where we could see others but they couldn’t see us, so I said sure. And he then bent me over and fucked me from behind as we watched the crowds walk by. Anyone could have seen us.

I went back to my hotel that night and thought what a slut I was hooking up with some guy I just met. The next day I asked him what he was doing   . He said he’d like to show me around, so I agreed. We met at the Staten Island Ferry and were going to see The Statue of Liberty up close. He took me to this one area of the ferry that was free of people, but someone could walk by easily.

He pushed me up against the wall of the ferry and put on leg over his hip. I heard his zipper open and my panty  crotch being pulled to one side. And him entering me. He fucked me against the wall and the angle he had me at, my clit really rubbed against his cock hard. I bit my lip to keep from crying out as I came. He then shot his seed into me just as the ferry was pulling into the island the Statue of Liberty was on. We disembarked and saw the sights.

The Weekend Ended With A Bang!

We spent the day together and had a lot of fun. The odd grope in public, kissing. He told me there was a subway that was deserted at this time and if we went in a back car, we’d have some privacy. All I could think of was that scene from the movie Risky Business where they fucked on the subway. I was going to get to do that myself tonight. We got on and There was one drunk old man in the car slumped over asleep. He wasn’t going to cause any issues, so we went to it.

I straddled him and guided his cock into my pussy. Then I rode him up and down and he sucked my nipples. I really was grinding on him and soon came. He groaned and shot his load into me. We rode the subway for a while that way, his cock still in my pussy. The drunk never did wake up . It was a sexy, unforgettable weekend I will not soon forget. It will surely make for a hot sex story !

Dana is a phone sex operator that has No Fucking Limits!