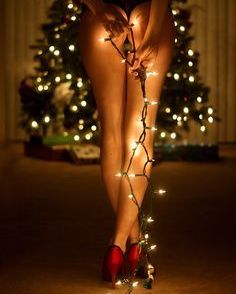 The other night I had someone come into my room while I was sleeping dressed as Santa. At first, I was freaked out. A stranger dressed as Santa, standing over me, watching me as I slept. But then he started running his fingers up and down my legs. I could feel them tremble. Was this exciting me? It was dark and all I could see was what was shown as the moonlight hit it. I tried to turn the light on, but he was not having any part of it. He told me to leave the lights off. Let our imaginations take control. I still had no idea who the hell was in my room. But his voice alone was inviting so I decided to let him continue to run his fingers over me. They made their way between my legs and I could feel his fingers pushing my panties aside wanting to be in between my warm, wet lips. I could feel my body quivering and I wanted “Santa”. I wanted him to fuck me so hard that I left him with a nice present. One that by the time he returned home to Mrs. Claus, he was ready to turn around and bury himself back inside of me.

My legs fell open to his hand. His big manly fingers running up and down my slit, exploring the wetness I have produced. They found themselves running up against the walls of my pussy, all warm, wet, and velvety. Santa began to pleasure me in ways I had never expected, so it was up to me to stay on his naughty list. I reached over and began rubbing those red pants. I could feel his throbbing meat stick begging to be touched. Despite the darkness, the moonlight was enough to enable me to get his pants down. Damn, his cock was hard. I started stroking him and enjoying that mushroom head of his. While he was enjoying his fingers deep inside of my pussy, I could not help but enjoy his rocket. Damn! I was sucking on Santa’s cock… This should be enough to get whatever I want.

After a few minutes of our foreplay, Santa removed his boots and took off the red pants that were around his ankles. He straddled my body. Pushing my tits together after feeling a nice warm lube drip on them, I felt his cock slide between my nice DD’s. I mean, come on, of course they are perfect for Santa. I could hear him moan each time he would thrust his meat stick between my delicious tits. Back and forth his hips moved. I could feel his thrusts getting more and more intense. With his hands pushing my tits together and delicious meat stick sliding in and out, I knew he was about to blow his load. I was surprised however, where it landed. I am a girl who enjoys the mouth but Santa obviously had different plans for me. With a few more hard thrusts, I felt his warm cum burst all over my face. Some hit my cheek, some hit my lips, and some even hit my nose…