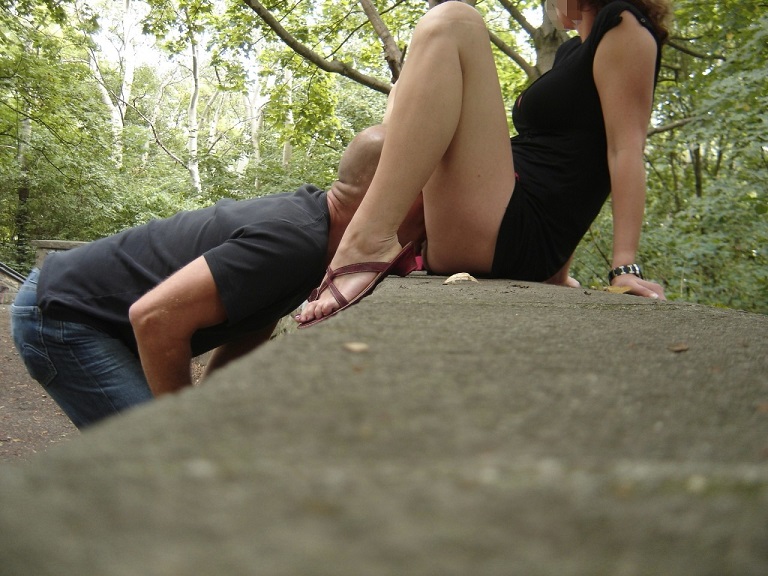 The first time I had public sex, it was such a rush

The first time I had public sex, it was such a rush. The boyfriend I had at the time was a real exhibitionist and he loved the idea of being caught in the act. Luckily we never were, but it was always a possibility. I then started to masturbate in public places to see just how much I could get away with. Beaches, parks, all kinds of places where I knew I could be seen by passersby and possibly security guards. This new man I’ve been seeing is as adventuresome as I am, and he likes this kind of risk as well.

His Face Was Buried Between My Thighs

The first time we had sex we decided to do it in a park. I know a couple of people walking their dogs saw us. One old lady in particular looked so shocked. Her jaw dropped open when she saw me sitting with my legs spread wide. My boyfriend’s face buried between my thighs. She hurried out of there really fast! I was laughing about it afterwards. The beach is always a fun place as well. Ones are wearing such skimpy bathing suits, it’s not hard to let things get a bit out of hand in the sand!

People Were Even Taking Pics!

We went to a different park a few weeks ago and found a semi secluded spot. We didn’t see any guards around.  So we began to fuck on one of the benches. I was riding his cock, really grinding on him. His hands were on my ass and I was bucking against him for all he was worth. It was hot as fuck and I was enjoying every minute of it. We could hear some people coming in a group, but we didn’t stop. I think a few even took some pics, but all they could see was my back, so I didn’t care.

Having Strangers Watch Me Is Such A Turn On

I told my boyfriend and he was turned on by it. He said we were going to fuck and have public sex that night again. We went to a movie theater and there weren’t a lot of people in there and we went to the back row. He had me give him a blow job. I’m sure the usher saw, but he didn’t do anything about it. It can be fun, but it is a risk. It made my pussy wet to do that knowing we could be caught at any moment. I am such a slut.Who knows maybe some time  we might make sex movies of us in public.