Giving Back On National Police Week – No Ticket For Me! ♕

National police week was not even on my mind the day I decided to go for a summertime drive. The weather was so nice that day. After putting on a pair of jean shorts and a white t-shirt I decided to go out for a drive and enjoy the nice weather. Sunglasses in place, my heels hit the gas pedal as I head towards the freeway.

The roads were nice and clear as I got onto the on-ramp. With my music turned all the way up I gassed it allow the acceleration to purr deep into my pussy. Something about the speed makes my adrenaline pump and my senses on overload. However, in all my enjoyment I didn’t realize the officer who was craftily hidden behind the bridge watching my short-lived speed enjoyment.

Suddenly, the sight of red and blue lights flashing in my rear view mirror abruptly ruins my enjoyment. A giant “Oh Fuck!” left my sweet lips as I pulled over to the side of the road. However, I was pretty certain that I was not going to be leaving with a ticket. Grabbing my license and registration I shift my cleavage in my v-neck t-shirt and checked my makeup in my visor mirror. As he began to walk my way I could tell my looking he had a rather large package in his pants that could be easily persuaded my direction. 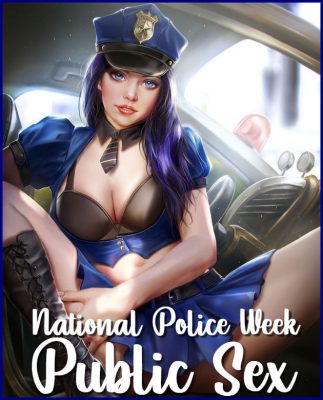 Once he approached the window I rolled it down for him. Batting my big beautiful eyes at him I apologized for my excitement as I rushed onto the empty high way. Then, I explained to him how good the wind felt in my hair. With a smile, he told me he bet that would have been a beautiful sight to see, but with it being national police week he had a quota to make. Although he was sure he was going to ticket me I had other plans. I clenched my cleavage together with my arms pleading for him not to write me a ticket. After all, I would be willing to do anything to make sure those points did not make it to my license.

Although he did not ask me so I grabbed the handle of the car door and stepped outside fo the vehicle. My heels thudding loudly on the black concrete road as he was escorting me to the back of my car. Pouty lip in place I begged again for him to leave me free of his ticket power. Not only was he holding all of the power in his hands. He was extremely strong and handsome. As I bit my lip he gave me a chuckle. Then, I pretended to lose my balance and grab hold of his package. “Oh my! That is a big weapon officer,” whimpering as I let go leaning back onto my trunk. Finally, he began to melt for me, allowing his posture to relax.

Although he reminded me that I have a lot of courage manhandling an officer. I could tell he was into the situation and that my sensual domination had worked in my favor once again. Then, he walked me back to his police cruiser as he began unstrapping his chest camera from himself. My panties became flooded with excitement as our public sex moment rose to a climax. He pushed me against the rear passenger door as he placed his hand on my shoulder. Then he pushed me to the ground and began pulling his cock out of his pants. My mouth watered with excitement.

Although I was hungry for his boner, I had to ask him one very important question. “I am getting out of this ticket right?” He chuckled and pushed on the back of my head. After all, of course, I had managed to work him up hard, to where I would be able to wiggle my way out of this fine. Although, I guess I should say fucked myself out of it. Fully melting in my mouth and grabbing my long hair and bringing me to my feet. Turning me to where my ass was facing him.

“Time for your strip search bitch,” he exclaimed pulling down my jean shorts and panties. I moaned as his stiff hard boner penetrated my dripping wet pussy. Cars began to pass on the freeway as he fucked me hard, my tits rubbing against the window. The two of us let out a loud groan of satisfaction as we came for each other. The perfect start to a nice summer day and National Police Week!