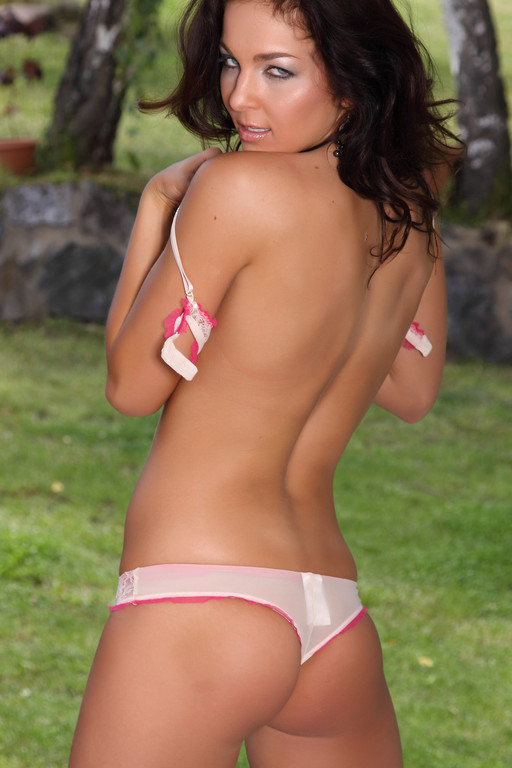 When we arrived back at Kenny & I’s house we got out, went inside, and sat in the living room, waiting for Kenny to come out. Kenny was mad that I just took off out of nowhere but I told him I had a surprise. He got excited, it was cute! So I left Tyrone and Kenny to talk in the living room while I jumped in the shower.

If I wanted this to work the way I had played it out in my head time and time again, everything would have to be perfect.

It didn’t take long for me to get cleaned up, freshly shaven, make-up and hair did, and into some of my brand new lingerie! I was wearing a pink and black corset top, with matching panties, black fishnet stockings that hugged my sexy thighs just right, and a pair of 5-inch pink heels. So I felt hot!

I was in the bedroom finishing my look off. A couple of spritz of hair spray here, a little more eye shadow there, and I’m ready! “Tyrone!” I yelled. Just like that, I heard him get off of the couch and into my room. There stood the 6’7”, ripped, black man that I had fantasized about for way too long! He looked at me in awe. I’ve never worn this little bit of clothing around him before and I could tell by the size of his growing cock this was going to be a night for the books! He looked me up and down a few times. Stepped closer to me and I jumped in his arms and started to kiss his big, full lips. I was grinding my pussy on his ripped abs as we kissed. Then Kenny came in.

I had Tyrone put me down, his cock big and ready for tight wet pussy that needed to be stuffed so badly! I lay on the bed on my stomach and raised my body up so that I was on all fours. Kenny was staring as if he had never seen my ass in the air before. “SIT!” I ordered and he sat on the end of the bed while Tyrone sild my panties off and kissed my pussy. Tyrone tossed my panties at Kenny. That’s when I knew we were about to get this Cuckold fun started! Tyrone told Kenny to suck his dick so he didn’t hurt my pussy when he slid that big black cock into me!

Kenny was listening and obeying everything that was said. And then it happened!