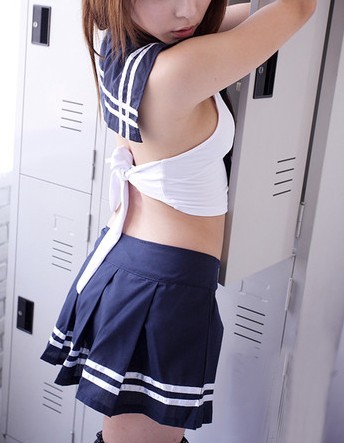 During my high school years, my parents hosted a few foreign exchange students.  My brother went to Japan for four weeks and in exchange, we got a very cute and bubbly 17 year old Japanese high school girl, named Mika.  She was shy at first but soon began to open up to us.

My youngest brother Tommy, who at the time was about 14, volunteered to take her to the mall, out for ice cream, roller skating and things like that.  Soon, they became very close and were always together.  That was fine by me.  I had finals I had to study for and I didn’t have time to be a tour guide.

One night, I was up late studying.  The house was quiet but I started to hear footsteps in the hallway.  I figured it must be Mika, scooting to the bathroom.  I went back to my science worksheet.  I heard low voices and the sound of a door opening and closing.  Tommy’s bedroom was next to mine.  Our closets were even connected to one another.

I got out of bed quietly and tiptoed into my closet, which was the back of his.  I strained to listen and I heard the distinct sounds of kissing.  I put my hand over my mouth in surprise.  Could it be that my dorky and pimply faced brother was actually making out with the hot Japanese girl?

I got up close to the opening of his closet door and very slowly pushed it open slightly.  It was enough.  I had a crack of door open and I got a perfect view of Tommy, sitting on the edge of his bed, legs spread open, holding Mika’s head as she squatted in front of him, her head bouncing up and down, giving him the blow job of his life.

She nodded her head and let his cock pop out of her mouth.  “I eat!” she said and went back to the business of blowing his cock.