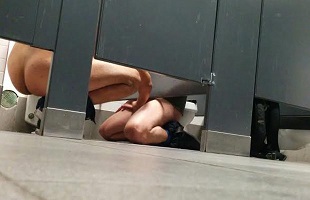 Funny sex stories aren’t always the sexiest, however, they’re still oh so entertaining. The punchline for this story isn’t to be missed so don’t stop reading now.

I was on a layover in Salt Lake City after visiting with Kylie for two weeks and I really had to take a piss. Being the little minx that I am, I went into the men’s restroom because the line for the ladies’ was out the door. I didn’t have time to wait that long and airplane bathrooms are cramped.

As soon as I stepped in, I heard soft moans from the only stall in the place. I crouched down and saw a set of feet and a pair of knees. I couldn’t help but smile to myself because I knew perfectly well what was going on.

Word had apparently gotten around that a woman sneaked into the men’s restroom.

The next thing I knew, a security guard opened up the door. When he did, I put a finger to my lips and pointed to the stall. It didn’t take long for him to figure out what the fuck I was talking about.

He informed the two individuals that they needed to come out and they did. They were two men and I knew which one was getting his cock sucked. He still had a bulge in his pants.

They waited near the door for the security guard to finish up with me. I informed him that there was a long line and if I waited I’d miss my flight back home. Considering he had to take care of the other two guys, he let me off with a warning.

It felt so good to empty out my bladder. When I finally got out of there I saw a girl leaning against the wall between the two bathrooms and she was crying. I asked her what the matter was.

Her only reply was, “A security guard came out with two guys.” I cracked a smile and asked her why she’d be crying over that. She said, “Because one of them was my boyfriend.”

My only thought was that she needed some sex therapy to get over that shit.