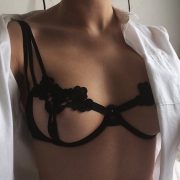 Fitting room sex seems so hard to actually get away with. I’ve always wanted to try something like it. After all, I love teasing and have definitely turned my boyfriend into the victim of all my little striptease ideas. He’s quite a lucky guy anyway since I love Victoria’s Secret and all kinds of sexy underwear and lingerie. Lingerie stores are my favorite place to visit at the mall and they have been since I was just a naughty young girl. Everything there is so damn sexy that it puts me in a ridiculously flirty mood. I’ll spend at least an hour awing over the bras, the panties, the sexy little stockings and some of their corsets.

Everything about the store is like catnip for me. I love to go shopping and bring back all kinds of sexy little things for my boyfriend or friends-with-benefits to pull off piece by piece. And of course, you can bet that he enjoys it too! Sometimes I bring him along so that he can ‘spoil’ me and buy whatever I pick out, and other times he’s only there to watch me try things on for him. He loves it even more so when I make a little stop at the sex store right after and buy a few toys, costumes, or some tingly lube for him to try. Of all the things I could buy, he loves the little lingerie costumes the most.

He has one main fantasy.

Of all the things that we’d tried, I’d never done the big one that most guys fantasize about. So far, I had never taken him into the changing room so that he could sit and watch me show everything off for him. It’s such a common fantasy to have, too. What kind of guy wouldn’t love to be pulled along by his sexy girlfriend, and made to sit and watch her put on a striptease?  They all end up daydreaming about fitting room sex and ripping everything off anyway. He loves seeing me naked, and he loves seeing me in lingerie. Trying on sexy panties, bras, and stockings for him in the fitting room is the perfect, happy medium of all these things.

I’ve bounced the idea off some of my guy friends from time to time, and we all came to the consensus that it’s really tempting. After all, if they’re following us into the store anyway.. why not reward them a little? So, like any good, naughty fuck buddy would do, I brought him along on a shopping trip, letting him think it was just another boring excursion to the mall. He had no idea I planned to turn it into fitting room sex. And when we were there, and I dragged him into Victoria’s Secret. Of course, he protested just a little when I made him carry along all the sexy things I picked out..

But I made it up to him.

And I made it up to him twenty times over. I had him follow me around for a while. I picked up a few things here and there, teasing him the entire way and flirting a little. The point was to keep his imagination at work. And once I had everything I thought I wanted, I started taking it into the changing rooms with me. I even got the OK from one of the workers to let him come in with me since it was all for him. He sat down, giddy like a kid in a candy store as he got to lean back and watch me put on a show, in the sexy, dim lighting.

I could tell he was daydreaming about it already. Images of fitting room sex flashed across his mind with every item I tried on. I started off slow, showing every bit of me off in the perfect lighting. I’d look at him in the mirror from time to time as well. He’s a sucker for that flirty look, the bedroom eyes in the mirror as I’m changing. I started with the red lace and moved into some tiny little black panties afterward. Sometimes I’d get really close and let him run his hands down my body.

I’d tease him for a few seconds before I pulled away again.

Soon enough, he couldn’t control himself.. he needed it. He needed me. The man was throbbing hard in his pants. As soon as I saw that, I swooped in to gently climb onto his lap. The fitting room sex was insane. I don’t know how we managed to keep it quiet enough to get away with it. The fitting room attendants all seemed to disappear and we went at it hard for at least an hour. This boy has been the luckiest out of all my boyfriends, fuck buddies, and casual flings. I love pushing his buttons just to turn him on, even with a little free phone sex when he least expects it.