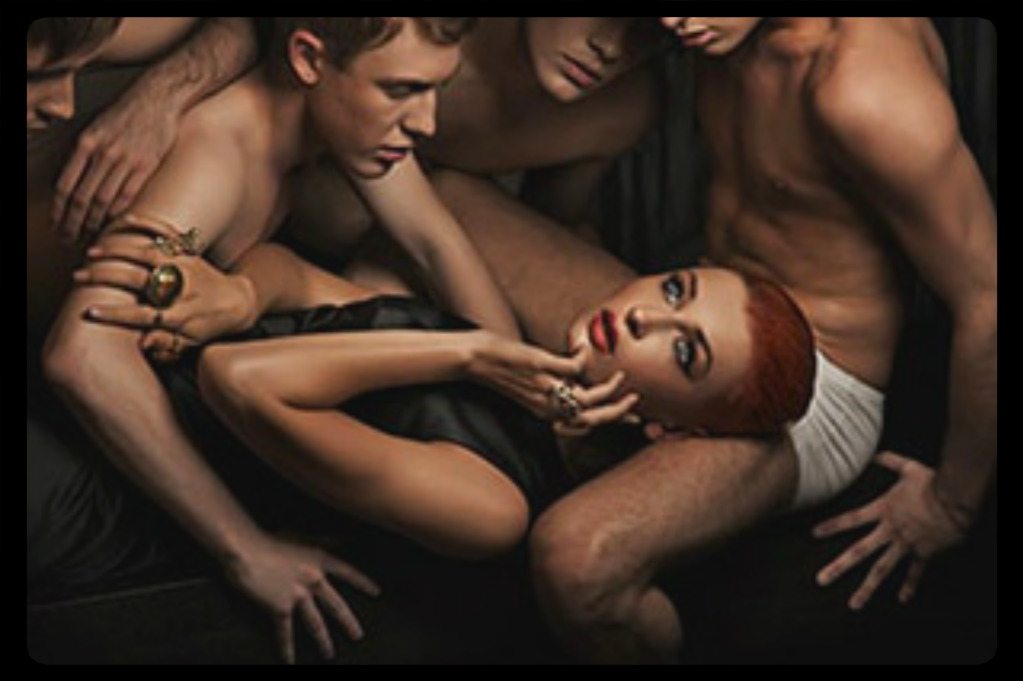 Just then, Red climbs on her and starts fucking her hard and fast. Nicky closes her eyes and Big John puts his soft cock back in her mouth. He strokes her head softly while he watches Red pump her.

Then, Josh says something and Red, without pulling out, rolls over so that Nicky is on top of him. With her breasts flattened against his chest, they glue their mouths together and continued fucking.

She parts her legs and grounds her pelvis into Red.

Next, Josh kneels between her legs and starts jerking himself off with his cock between Nicky’s cheeks. Nicky writhes between the two men. Her head begins to move from side to side and her eyes are closed tightly. Josh holds Nicky’s hips and starts thrusting. Josh’s body stiffens. Then he collapsed on top of Nicky, drained of energy. They are all motionless. Finally, the temporarily forgotten, Big John moves Josh aside, and as soon as Nicky rolls off  Red, Big John mounts her, fucking furiously.   Finally exhausted, Josh and Red leave the bed and watch from the couch.  Phil and Red left the bed and watched them from the couch. Big John does not last very long.  He lies still as Nicky slides out from under him. When she gets up and starts dressing, I turn and leave before she realized I was there watching.

Let me know what you think of my Real Sex Stories!