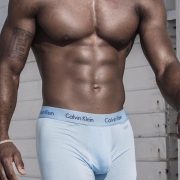 God, can you believe it? I met this cute guy at a local bar down here. His name was Jackson. He was a cute as hell, dirty-blonde with a little trimmed goatee. Some nice, muscular arms being showed off all night long. I thought I scored big time when I was heading home with him. I was pulling out all the stops and teasing him the whole way, thinking I was going to get myself in a little trouble and make him give me the pounding I was begging for. Then we got to his house – and guess what? The hot-shot biker ended up being nothing more than a little fag.

He couldn’t hide it.

And that’s what he did with Jackson.

I mean – no complaints from me. Hell, at least I still had sex with someone. The fun part is that I got a big black cock out of it too. I thought this guy was a total badass. Unfortunately, he ended up being nothing more than a bottom. I called his friend over and took all my frustrations out on him. However, I wanted a nice, hard spanking, and a strong pounding to keep my pussy sore for a week! Thankfully, my ex-boyfriend Omari and Donte definitely delivered on that. I got my share of revenge. I made sure Jackson laid in the bed next to us the entire time.