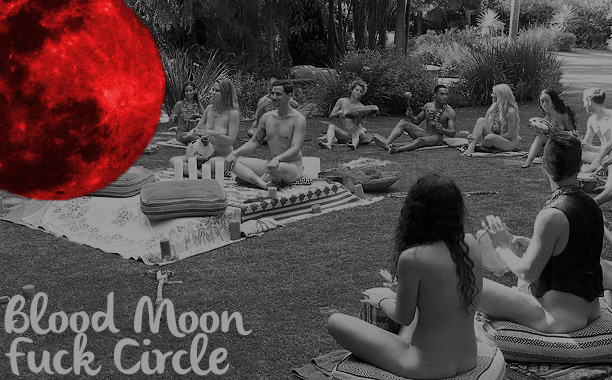 For anyone who has been living under a rock for the last while and didn’t already know, there was a full, blood moon last night. This is because it was a “supermoon” – a moon which is at the closest point in its orbit to earth. There are between four or six of these a year, but this is actually the largest of this year’s supermoons, as the moon’s orbit isn’t a perfect circle.

This supermoon was particularly special, though, because it coincided with a lunar eclipse, which gave it its distinctive pink color, and earned it the title “Blood Moon”. The last time this happened was in 1982; the next will be in 2033.  So for anyone who knows me, knows I love me some superstitious hippy shit, so of course I took myself to what’s known as the ILL-Uminate Drum Circle.

It happens on the beach in Miami and is amazing. Lots of like-minded people get together to play music, get fucked up, cast spells and incantations and smoke copious mounts of weed. I, of course, being true as ever to my nature went with the sole purpose of, getting fucked.

I wore a little short white hippy dress and gladiator sandals, without knickers or bra, left my hair down and long, curling naturally to my shoulders. I stopped at the liquor store on the way and bought some rum, I also stopped and saw my friendly local drug dealer and scored some molly, better known as MDMA, also known as Ecstasy.

I got there and it was a melee of people, some banging drums, some singing, a huge bonfire burning in the middle of a ton of people, the air heavy with smoke.

I sat down and joined the drum circle. I didn’t know any of the people I was sitting with but I cracked open my bottle and before long had struck up a conversation with the guys sitting next to me. We shared some laughs, a lot of drinks, listened to some amazing music and before long I had laid back, my head in the sand, and was looking up at the red moon, enjoying my surroundings. I kind of dozed off, (or maybe I just zoned out for a second due to the molly euphoria that was sweeping through me) with my knees slightly up and my toes tapping.

I felt and smelled a male presence hovering over me and someone plant their lips on mine. It felt so natural and I was so caught up in the moment I just kissed back, his mouth tasted good and I pushed my hand to the back of his neck as I slid my tongue into his mouth for him to nibble on. I felt his hands start to rove around my body, feeling my tits through my dress, then moving slowly down to rub the mound of my pussy. I arched my back and parted my legs, and I felt his hand slide up my inside thigh to my bare cunt. I gasped as he pushed a finger inside me and opened my eyes.

He dropped to his knees and obliged me and I sucked hungrily. I was concentrating so hard on sucking his fat dick I barely noticed that the first guy had got between my legs and was slapping his hard cock against my clit, it was only when he penetrated me hard the first time that I let out a yelp, his cock was huge too!!