Young Slut; He Pimped Me Out To His Friends 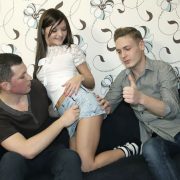 A boyfriend of mine I used to have used to do something very naughty. Yet I allowed it and even enjoyed it. I was a young slut, and open to a lot of different scenarios. I was a teasing teen He needed money really badly this one time when he didn’t have a job. He said half-seriously, he wished he could “sell me” to his friends. I laughed at the very idea of it, then he asked if I’d consider it seriously. He said he knew at least three of his friends had the hots for me. He knew he’d be able to get them to pay good money to fuck me. I thought about it for a while and asked how much he thought he could get. He said he’d need to talk to his friends and come to some sort of figure. I couldn’t believe we actually just had such a conversation.

He Was Grinning Ear To Ear

He came home a few hours later and had visited all of his friends in question.  And He was grinning from ear to ear and asked me if I was game to be a young slut for pay. He told me how much they’d be willing to pay to fuck me. He said that he’d split the money with me; I said sure. There were things I wanted to buy, and bills I wanted to pay. This seemed like it could go pretty well for us. He had told them all he wanted to watch, and I was ok with that as well.

His Friend Stood Nude Before Me

The next night one of his friends came over. I saw them settling up in the kitchen before coming out to the living room. And  I was on the sofa in some lingerie. I could see his friends hard on already. He grinned and started to get undressed. My boyfriend sat down and watched the proceedings. His friend stood nude before me, his hard cock bobbing in the air in front of my mouth. I took it in my hand and stroked it before popping the head of it in my mouth. I licked the tip and all up and down the shaft. He grabbed the back of my head and pushed down hard.  And He called me a pretty, young slut as he gagged me with his hard shaft.

He Was Bigger Than My Boyfriend

He Squeezed My Little Nipples

The next night another friend of his came by. He too paid my boyfriend before he pulled me into the bedroom. He stripped and got on his back on the bed and told me to straddle him. I did what I was told, like a good, young slut would. His cock was around the same size as my boyfriend’s, and I rode him easily. He squeezed my titties and pinched my nipples. I was bouncing up and down on him and looked over my shoulder. I could see my boyfriend once again masturbating as he watched me fuck one of his friends. It was kind of unique, but I liked it. I loved the extra money as well.

I Made A Ton Of Money For A While

This played out every night for the next several nights. Soon his coworkers at the garage said they’d heard about this little arrangement. They wondered if they too could get some action with his hot, young slut girlfriend. I was servicing his friends and coworkers more nights of the week than not. The money was pouring in and all cash. I don’t know why he hadn’t thought of this years ago; it was really paying off. I was having lots of good sex and making money besides. He was paying down his debts one blow job and fuck at a time. It was a good deal for all of us.

I do the edgiest kind of teen phone sex.  Give me a call!