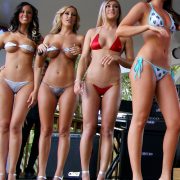 Of course, there was the usual amount of mixing and mingling, tossing back the Henny. But, there was the all-important task of setting up on stage and half of that battle is in placement. You always want to pick a vantage point that’s good for every eye in the place.  I also need to see as many hot dicks and pussies as I can. It helps keep the sexy levels high when I can see with my own two little peepers that I’m turning the crowd out!

I gathered my toybox of goodies and had it taken to the spot I picked out, then I snuck backstage to put on my Show Stopper! I just love the looks on people’s faces when I come onstage.

Callin All Contestants! Take your places on the stage!

We all mounted the stage and I immediately opened my long, flowing kimono robe to reveal a huge pink horse cock strap-on. The crowd went wild! Cheers and whistles rang out as I did my catwalk strut to the center of the stage. I saw the worried looks on the other girl’s faces. Don’t blame me because you fail to plan! I think of everything to set the roof on fire! What? I strapped it on so I can ream those assholes and I lick them to get them wet first!

I mean, I could have dry rammed them, but they’re my sweet boys, so I take it easy and just make it look like I’m being hard on them. So, I swung the pink monster back and forth to let them all hear the slapping sounds every time my thighs make contact with it.

Rim and then Poke! It’s the new game in town.

We were all doing our things simultaneously, But, I saw more people congregating around MY part of the stage.  I fucked each of my guys slowly and had arranged mirrors so everyone could see each stroke. Dicks were hard and pitching tents in men’s pants and pussies were leaving a wet ring on the women’s pants. Perfect! All was going just as I had planned. My men groaned in turn and I made a spectacle of showing off the dripping pre-cum by giving a Vanna White type of hand flourish. The spotlights followed my hand gestures.

But, best yet? We hadn’t even gotten to the main event! And speaking of that, It’s fair to say that my men also had the best-looking dicks in the house!  Furthermore, how I chose to fatten those ding-a-lings up was the star attraction. OMG! My sexual confessions can go on for years without repeat.

So, now it’s on for the finale!

Each got their turns, but the last man standing was Big Black. He’s hung like a fucking Brahman Bull! I gulp hard to ready my mouth for the stretch and opened wide. As practiced, Big Black grabbed the back of my hair and tilted my head back to accommodate that massive dick.

The audience gave a loud moan in unison.

Then, my throat bulged under the mass of him. Back and forth he stroked and then, he let it go. It was ahead of plan, but it was still a show-stopper! However, this fucking competition was one for the books! Call me to set it off. If you don’t know to have a phone sex chat, I’m the girl for you. At the end of the night, the winner was announced and guess who strutted off that stage with a wad of cash?  Yup. Me! Give Dixie the chance to make you a winner too! I’ll make you a world cup cocksucking championship winner too!