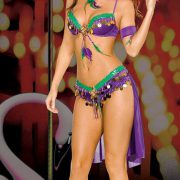 So, I always forget about Mardi Gras and being one of those wild Mardi Gras girls until the weekend before Mardi Gras. They’re always a bunch of specials out, usually in bars. Everywhere else seems to use Fat Tuesday. Those places are not party places.

Bars, though, they get it. They understand girls like me need an excuse to let go, be free, and to let ourselves be naughty. For once, it’s an excuse to not be the prim and proper bitches society demands of us.

So I went with some friends to my favorite bar. All of us arrived dolled up and painted. A few of us wore boas and beads. For me, I wore a tight white t-shirt, no bra, and skintight jeans. But really, It didn’t matter much what we wore. We were there to make a show, and have a good time.

I hope you know by now I’m an instigator. I love creating problems where there are none, and last week was no exception. My friends and I drank, loudly talking about how we liked best getting fucked. The bar played some loud, electronic music, and honestly, a good time was being had by all. Thanks, Guinness.

Then, a couple of guys came over to our table, just as drunk as we were. They demanded we flash them. “Isn’t that what you bitches do?” one guy asked me. “Show off your tits for us?”

Look, I took it as a challenge.

After he said that, I hopped off my chair and grabbed my friend’s shitty beer- I wasn’t about to waste a pint of good beer. I looked him in the eye, poured the beer over my white t-shirt.

“This a good enough look for you?” I yelled at him, and his eyes went wide. The loser actually looked away, and we all laughed at him.

“Typical man,” I shouted. “Knows how to rile you up but can’t fucking bring you all the way.” Or at least, I hope I said that. I might have shouted, “Can’t get you to climax” and just ruined the metaphor entirely.

“Elise!” One of the bartenders gave me a stern stare. So it was nothing more than his usual warning. “Take it upstairs.”

I think I gave him a salute, and my friends ordered more beers for us. In the meantime, he opened up the side staircase, shaking his head. I mean, I might have a bit of a reputation. Some of the guys following me up the stairs were not the original three I had a problem with. So I climbed up the stairs, maybe 15 guys following me. They were all revved up, waiting on their wild Mardi Gras girls show. As I bounced up the steps, my tits were visible through my wet shirt. But my ass must have been wet, too, because someone slapped it through my jeans.

So I kicked him back down the stairs, and two other guys took his place.

We waited for my friends to come up with decent beer for everyone, and then my friend Trish, the most flexible, placed herself on the table. Somewhere in the chaos, I decided my shirt was too much trouble, and I ripped it off. (I don’t have it now. I am not sure what happened to it).

Then, I moved behind Trish, my hands on her breasts. She giggled in my ear, laying her head back on my shoulder. “Watch well, you dopes!” I shouted. “Learn how to get us to climax, and maybe then we’ll actually hop on your dicks!”

Showing Them What to Do

And then I let them see what to do. I pinched her nipples through her shirt, massaging her tits as gently as I could. I placed kisses along her neck. Then, I moved down to her shoulder. The men grew silent for a moment. When I lifted up her shirt, I could hear a step forward from almost all of them.

Next, I reached down Trish’s breast, bringing it to my mouth, sucking on it. My hands wandered down her skirt, lifting it up. I moved my hands between her legs, showing everyone her cotton panties. Then, I moved them aside.

I swear there was a collective gasp. At least, there was one in my ear, as I began putting a finger inside her. “You’d all better be finger banging pussies when you get home,” I commanded. “Find that g-spot-”

Trish let out a moan, her hips coming off the table.

Continuing, I smirked. “Just like that.” I put in another finger. Soon, Trish came all over my hands, the men seemingly placated.

But really, they had walked right into a trap my friends and I had set for them. The door shut behind them, my friends began to laugh. “Better prove you can satisfy us,” one of my friends demanded, taking the first guy and throwing him onto the table.

I promise you, we wild Mardi Gras girls taught them well.

Want to have hot phone sex hear more wild sex stories? You should call and let me whisper them in your ear.