Submission; He Was A Hardcore Master And He Blew My Mind 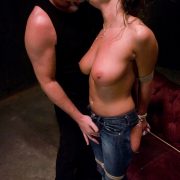 I Felt HeCould Push All My Buttons

He called me a switch, one that can be dominant or submissive. I told him he was right. I find submission attractive with the right partner. And I felt he could press all my buttons.  And I could be pretty cruel to the clients that came to me. For some reason, I thought he’d go easier on me since I was a fellow dominant. I was wrong.

This Was Not Going To Be Like Fifty Shades Of Grey

He invited me in when my time for the appointment arrived. He smirked at me, looking me up and down. Saying I must be one woman who’s seen Fifty Shades of Grey one too many times. He had lots of women like that he said. They wanted to be tied, spanked, dominated by a real man. Not the beta wimps I marry them to that wouldn’t dream of such things. He said those movies and books had been great for his business. And He serviced plenty of men as well, but women were becoming more frequent for him.

It Knocked The Wind Out Of Me

He got out some ropes and tied my hands behind my back. He tied my knees, as were my ankles. I was fairly immobile even standing. I could feel myself growing wet in anticipation. He led me towards a bench and bent me over it so my ass was up. He took a paddle and whacked me with it very hard. And He did it so hard, you could hear it slice through the air before I realized. It knocked out the wind of me, but he kept it up for six whacks. He then put his fingers in my crotch and softly laughed. He said he could feel my wetness seeping through my clothing. I couldn’t deny it.

His Hands Slipped Into My Panties

I Was A Total Slut

I soon found out. He slipped two fingers inside of me and then back up to my clit, teasing me. I felt like I was on the verge of cumming, but he would not allow it. I felt like I was teetering on the brink of an orgasm, yet when I’d nearly get there, he’d stop. He took out a leather flogger and whipped me across my nipples with it. My nipples stood up in hardened peaks. I felt like a total slut. These submission games were making me hotter than I’d been in years.  It was so different to be on the other side of things.

It Was Harsh But My Orgasm Was Never So Intense

. He laughed at me as I had the most intense orgasm of my life. I collapsed on the floor and he let me. He didn’t even try to hold me up. I lay there panting and bucking. The crotch of my jeans wet from arousal and my orgasm. After a few moments, he hauled me up and untied me. He then gave me a hell of paddling on my ass once more. I then went on my way, my mind blown by the submission encounter. I need to play switch more often.

Fetish Phonesex Is Hottest when you Have A Openminded