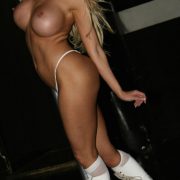 I was only eighteen when I began stripping and immediately fell in love with it. How could I not? I would show off my tits, dancing on stage in a g-string, surrounded by men slipping me twenties, then fifties… The more I learned, the more the value of the bill grew. Such an easy, delightful job – flirting, dancing, drinking… I mean, what could you possibly not love?

Of course, as I soon learned, making lots of money with my legs wrapped around a silver pole was easy. And lots of fun too, of course. But the minute I found out about the stripper VIP room, I changed tactics all together.

The stripper VIP room was where a girl could make the most money. Forget about the guys around the stage waving their meager bills at you in a drunken stupor! I soon learned the art of spotting the men worthy of my attention. And by that, I mean the men who wanted much more than a cheap lap dance in front of their friends.

It was generally easy to spot the candidates, too. I had a whole routine that never failed to work in my favor. I’d wrap my legs around the pole, twisting my body in unimaginable ways and scan the room. Bachelor party, PASS, lonely man in jeans, another lonely man drinking beer, PASS, drunk frat boys shouting, PASS. Then I’d finally spot a man worthy of my attention.

Tonight, the chosen candidate wore a suit and was alone, but from the stage I could see he carried himself with poise. Upon closer inspection with another libidinous move, I spotted a Rolex wrapped around his wrist. Definitely promising for a visit to the stripper VIP room. With my hands running through my hair, I approached him, still on stage. A sideways nod of his head invited me to sit besides him.

I hadn’t been wrong about the business man. His shoes were made of Italian patent leather and a Valentino suit sculpted his broad shoulders. Smiling, I slid into a seat, inhaling his masculine cologne and crossing my legs towards him. A second later, a flute of Veuve Clicquot bubbled in front of me.

What was unexpected about this man was that it was no longer just a matter of doing business. I could actually feel myself getting excited. My nipples became more erect, which he did not fail to notice. My lacy g-string moistened with anticipation, and a trickle of pussy juice ran down my thigh.

Would the attractive, seductive business man request to enter the stripper VIP room with me?

He reached into his pocket and took out his wallet. Next thing I knew, a dozen hundred dollar bills were sprawled out in front of me.

“This is a little something to get us started,” he said. I sort of smirked, trying to be somewhat coy. My stripper friends on stage were looking my way, curious about what would unfold.

At the sight of the pile of money, my nipples grew even more erect. The owner of the club was also observing us, making sure I was playing my cards correctly.

My tits certainly were enjoying this exchange of carnal pleasure and sexy business!

“Sounds like the start of a very pleasant evening,” I purred into his ear. I collected the hundred-dollar bills, leaning into him to graze my breasts nearer to his hands.

“Why don’t you show me to your nicest stripper VIP room?” the man then said, rising to his feet. Another movement of his head later, and another bottle of Veuve Cliquot magically appeared in his hands.

“Why certainly,” I pouted, rising to my feet in my sexy five-inch platforms.

I strutted away from him, feeling his eyes burn the back of my tight ass with that lacy strip tucked right between my butt cheeks.