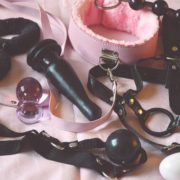 Strapon fucking was the next big thing on my fuckbuddy’s list of kinks. He always craved something to push his limits. He compiled a little list of kinks and taboos that he wanted to try one day, but never knew he’d get the chance to actually try all of them. It all started so innocently. He’d been a regular guy that I was going to hook up with. One night, I checked his medicine cabinet and found some water-based lubricant. Now, it’d have been something that I would totally look over usually, but it definitely looked well-used. My curiosity hit a peak, and I had to ask. It wasn’t long before I realized he was a secret little butt slut.

We took our kink adventures to the next level. I played with all kinds of toys and things with him, bringing him to love anal edging and everything we used for it. There were still so many things left to try. First, it was all about using vibrating sex toys that connect to your phone. He went wild for those. Those toys are expensive, but well worth the investment, especially if you have a girl like me to play with you! I pushed him over the edge time and time again with those toys. However, the fun was yet to start.

He finally had the chance.

All eleven inches of it drove into his ass mercilessly. I gave it to him slowly at first, inch by inch, so he could adjust to it. However, once he fit it all in comfortably, all bets were off. That was MY ass to fuck now.