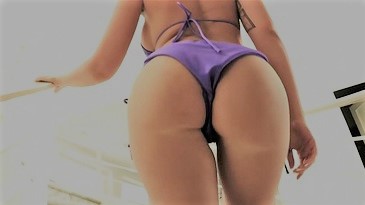 A shiver of fear went through me as he pushed the big, round head against my pussy and when he started pushing it in I felt myself stretch around it. He kept going and I gasped as it really started to fill me. He looked at me and stopped, getting off the bed. “I think you’re going to need a bit of help,” he said and took out a pair of handcuffs. Ryan flipped me onto my stomach and I shifted so I was down on all fours while he grabbed at me. He held my arms up and snapped the handcuffs on my wrists, doing it too tight.

I practically screamed when he pulled the dildo out of me and I felt so empty with it gone. He undid the handcuffs and I curled up into a little ball as I tried to ignore the throbbing, burning pain in my ass. I looked at the thin red lines the handcuffs had made on my wrists while I caught my breath. I was just starting to relax when Ryan got back on the bed and flipped me onto my back. He shoved my legs apart and I looked at his hard dick; he was big but not good enough after what I’d just had. Oh well, a dick’s a dick so I let him fuck me until he was both worn out. Call me and let’s make more adult sex stories!