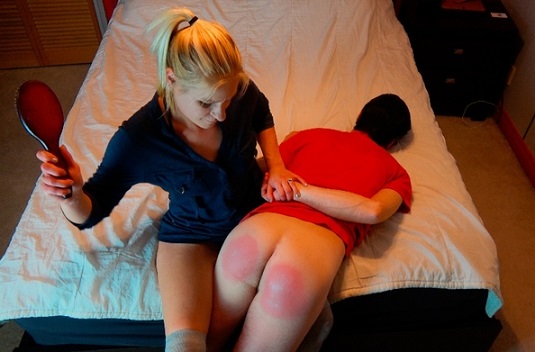 He Wanted A Good Spanking

My boyfriend had asked me if I’d ever been into spanking not long after we met. I said not too much but was open to trying new things. I of course assumed he wanted to spank me. However, I was soon told he was the one who craved to be spanked. I pondered this for a moment but told him I was fine with that. In fact, I thought it might even be fun. I said he was now being kept on a demerit system and he’d be punished by me accordingly. He seemed to like the idea.

He Won’t Be Getting Dessert Tonight

Later that evening, he brought home the wrong cut of meat I’d asked for at the store. When he protested and said they were sold out, I told him he simply could have gone to another store. His jaw dropped. I said not only was he not getting dessert; he was going to get a spanking. He almost looked afraid when bedtime came and I told him to bend over the bed. I took the large wooden hairbrush I used to brush my hair every night in my hand and smiled. He knew immediately it had his name on it.

His Ass Was Very Red

I thought you want to be spanked, I’ll spank you but good. I leaned over and drew my arm back and really let his ass have it. And I was kind of shocked at how much I enjoyed doling out punishment for him. I felt a bit guilty with the improvement of my mood in inflicting pain upon him. I gave him six sharp strikes, and he had a red ass when I was finished with him. He said he didn’t know I’d take to it so easily. I replied I didn’t either. The next day he still had marks on him from the spanking. A few days later, he forgot to pick up my dry cleaning on the way home from work. This too would require a punishment later that night.

I tried a bare bottom spanking this time, and he seemed to like the idea. I told him to bend over my knee while I sat on the edge of the bed.  And I couldn’t hit him as hard with my hand as when I had a spanking implement like the brush. I could feel his cock growing hard on my thighs as I draped him over. I commented on this fact as I gave him ten smacks for the forgotten dry cleaning. And I told him I needed that dress he was to have picked up for work tomorrow. Because of his thoughtlessness, I’d need to choose something else. He deserved every smack he got.

I Knew He Needed It Bad

The Spanking Took It Up A Notch

Do you have a fetish? I know that I do! More than one!

Give me a call and let’s have some fetish phonesex