A sounding fetish should always be approached with intense precaution! 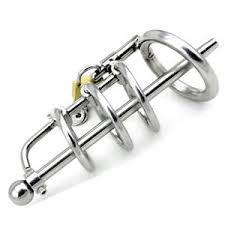 I delved into a sounding fetish for one of my subs with a bit of hesitation.

Sounding can be a dangerous fetish! Plenty of care must be taken when messing around with the urethra. Once mastered, many different sizes are available for use. One day, I was shopping for a chastity belt for my submissive. Once I held the keys to his cock, I would have total control of his life. His finances, his mind, and now his cock…all under my control. Upon looking for this chastity belt, I found several devices that included sounding equipment. I had never experienced this fetish before!

Before the use of this device, I needed to stretch his urethra. I bought several sounds in addition to the chastity device. I was going to train him for it. Starting with the smallest one first I made him surrender to me with a urethral sound. Then I moved on to the next size up! I kept switching out for larger tools until I inserted one that was bigger than the one in the chastity device.

He needed to get used to that level of stretching because that chastity device was going to be on him for a while. While squeezing the tip of his cock to open up his urethra, I pressed the tool as far into his cock as it would go. Then, I moved it in and out until he looked sore. After pulling out the device, I replaced it with the chastity device and locked it.

I told him that he would have to go to work with it on and come beg me if he needed the keys.

The belt also had spikes, so that if he got a hard-on, it would cut into him! It was the perfect control! I owned that bitch from then on! For feminization phone sex, read more of my blogs!

Seeking fetish phonesex? Give me a call!