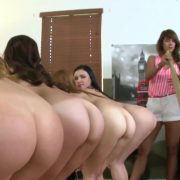 For those who don’t know, to join a house in college you must pass a few humiliating challenges. Hazing as we call it makes for some fun sorority sex games. Intimation begins after the girls pledge our sorority house and last for three weeks. Yeah three weeks is a long time but I like my pledges to pass in stages. With each stage the hazing gets harder and more humiliating. There are three stages with each stage lasting a week. If the girls want to be apart of the most popular sorority then they are willing to do whatever it takes. I had to go through a ton of sorority sex games but this time I’m not the pledge, I’m the leader. I had an obligation as the president of the sorority. The girls are to be the hottest and best.

It’s the night before initiation is to start and we threw a huge party. It was a huge college party. Their is a ton of alcohol and hot guys from the surrounding frat houses. The girls have no idea this is when initiation really takes place. We blow the whistle signalling them to line up after their drunk. Pledges partner with a frat boy. After the pledges pair up they are told to strip into their bra and panties in front of the guys. The 50 girls pledging do as they are told. The men are then handing paddles, paddles for spanking the pledges. They each spank the pledge until told to stop. I didn’t expect any drop outs from spanking but I did expect it to humiliate them a little.

The best is yet to come

To get a spanking in front of everyone is humiliating. Especially when the person spanking is hot frat boy. Each pledge gets 50 spanks a piece, one slap for each girl pledging. After the spanking each girl was brought into a room with a bunch of slutty stripper clothes. They pick out an outfit and come back into the room. The living room has a small stage and poll, the pledges had to put on a strip tease for our frat boys. Frat boys judge the performance. The frat boys picked three winners which received their clothes back. The remaining 47 girls are denied their clothes and move to the next challenge. Lap dances is the next challenge. Each pledge had ten seconds and there were two winners.