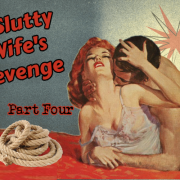 After the wedding, everyone went to a local bar to catch up with all of our friends from college.  There were a lot of people there.  And a lot of handsome men for me to use in my plan of revenge.  Someone bought the first round of drinks and then I began my plan.

I walked away from my husband without a word and right up to Cody.  His eyes immediately went to my huge tits, as they always did.  He was practically drooling over me in my sexy red dress that my boobs were literally falling out of at this point.

“This is going to be so easy!” I thought. Men are so silly!  This made me so wet that my pussy juices were running down my thighs.  It was then that I remembered I wasn’t wearing any panties.  This made me even more excited.

No Conversation Was Necessary

I slid into the dimly lit booth and Cody sat down very close to me on the same side.  He seemed to know that he was going to get to fuck me.  He probably also sensed that I was just using him to get back at his best friend but he didn’t seem to care.  Men are so funny when their dicks lead the way!

I didn’t even bother to make conversation.  I grabbed his hand and shoved it down to my drenched pussy.