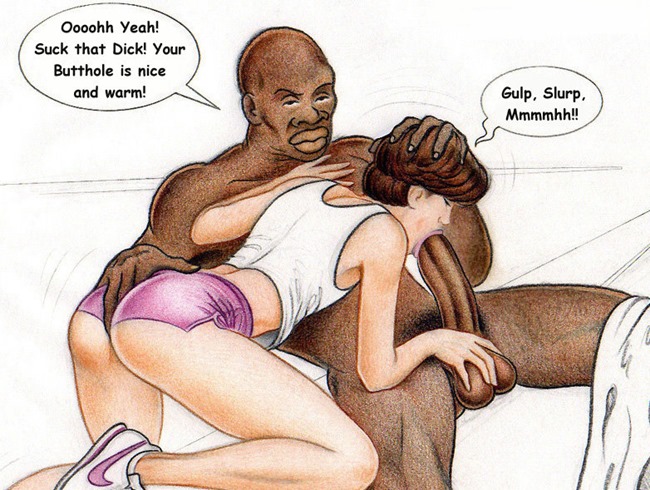 Sissy boy is all dressed up for his first cock

When sissy boy Ted got to the sweet I handed him a glass of champagne and a gift bag with his new sissy outfit.  I showed  Ted to the bathroom and told him to change into his new outfit. I had just finished pouring myself another glass of bubbly when there was a knock on the door. I opened door to Brent, Jason and their big black cocks into the room. As I pour drinks for our guests,  Ted comes out of the bathroom; he looks nervous, but sissy boy Ted is adorable in his crotchless lace panties and matching camisole. Ted is still having a hard time walking in heels, but I love how his legs look in his new fishnet thigh highs.

I walked Ted across the room where Jason and Brent were waiting, stroking their big black cocks. I told  Ted to spread his legs and get on his knees. Once he was on all fours, sissy boy Ted was in the perfect position to take Brent’s long thick BBC into his mouth. As  Ted went to work on Brent’s cock, I got behind him to get his virgin ass ready for the main event. I spread Ted’s ass open and began to tongue his sweet little pucker. Rimming his sweet little ass until I could feel him relax and open. When sissy boy Ted’s asshole was good and wet, I gave Jason permission to take sissy boy Ted’s virgin boy pussy.

Jason slowly started to work the head of his cock into Ted’s tight virgin boy pussy. Sissy boy Ted tried to cry out, but the sound was muffled by Brent shoving his cock deeper into  Ted’s throat. I love watching Jason’s fat black cock spread Ted’s  asshole open. It didn’t take long for sissy boy Ted to relax and Jason was able to bury his big, thick black cock into that pretty, sissy boy pussy. Ted’s tiny cock was stiff and dripping with pre-cum as Jason and Brent filled all of his hole with luscious BBC.