I Went Sexy Toy Shopping With My Friend and I Got a Little Heated at the Store! 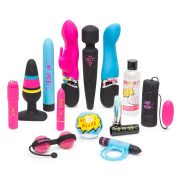 My friend expressed to me that she had never been sexy toy shopping, which was unacceptable!

If you are my friend, at some point in your life, you will have to go sex toy shopping, or I will drag you with me. We were talking about the kinds of toys we had, and I expressed that I had a tremendous amount that only grew larger. She told me that she had this old clunky jelly rabbit that was given to her. When I saw it, I was like, “Oh, hell no.” I looked up sex stores near us, but unfortunately, I lived out in the middle of nowhere. We drove for about an hour and a half to the nearest mall, which had a sex store. I spent forever trying to find the nearest one. She began to look nervous as we approached the store — the look of an un-liberated woman.

A repressed girl. Not on my watch, that’s for damn sure. I walked in there as confident and composed as I usually am. The attendant asked to see my license to make sure  I was old enough, as they typically do. This terrified my friend, but I reassured her and began looking around and picking things up to slip her out of her cozy little comfort zone. Finally, she began to poke around with genuine curiosity. I knew this would happen. All girls love sex toys. There is something for everyone, just like in porn. I led her over to the more modern/ expensive section. Toys here ranged from a fifty-dollar minimum to like a four thousand dollar maximum.

The stuff in the thousands was mostly grandiose furniture and machinery.

First, I flipped her on her side and laid behind her.