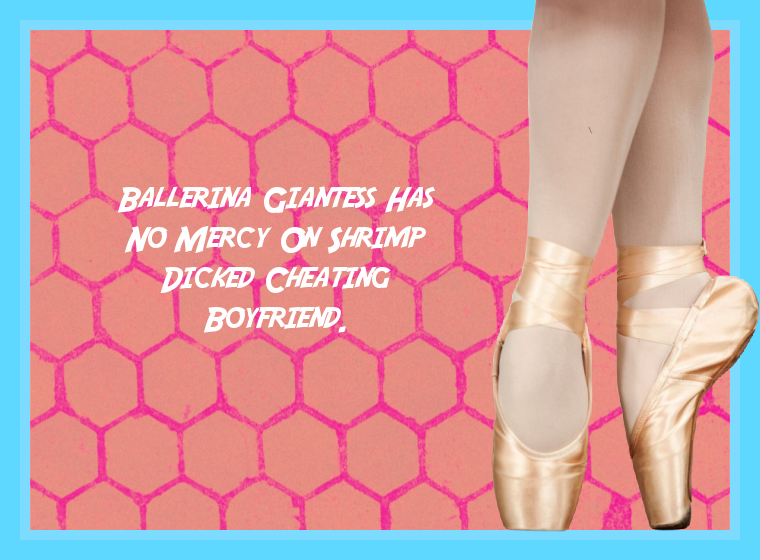 The giant ballerina has fame, fortune, and fine clothing.  Some say she has everything a gal could ever want, but there is one thing that she is missing: a faithful boyfriend.  She is toying with him in this small fish tank, tapping on the glass as he says how sorry he is.

Weeks ago, she found out that he was playing around with the set designer, who left after being called out on her actions.  Overcome by the betrayal, Stella had started drugging his nightly drinks. He thought that he was fine and forgiven, but she was poisoning him with shrinking pills.

These can only be found on the black market, but the giant ballerina had ways of getting what she wanted.  Now, he sat on a polymer sandcastle, asking her to please let him go.  Our sexy giantess was not in the mood for mercy and left the room for stage rehearsal.

She Has No Compassion For A Lying Cheater

Stella did not come back until it was time to get ready for the final show.  He still pounded against the glass as if she could hear him.  He was the size of a grasshopper, and she could barely detect his cries for help.  The sexy giantess went about putting on her tights and makeup.  She did not want to listen to his begging anyway because she wasn’t going to let an insignificant punk make her late after he had already ruined her day.

She reaches into the fishbowl, grabbing him by his shirt collar and looking at him before she drops him in the bottom of her pointe shoe.  He was shocked when he fell on his ass.  When he looked up, it felt to him like he was in a well, trapped and waiting for rescue.  It wouldn’t come.  No one knew where he was, and no one would want to come to his rescue after learning of his infidelity, anyhow.

She dumped powder into the shoe, and he inhaled a mouthful, huffing and choking to get the flavor out. Before he was able to compose himself, she stepped into her ballet shoe.  Smooshing and cramming him to the bottom of the shoe, she knew he would have to take a lot of pressure tonight.  It excited her.

Could He Survive Such A Thing?

The curtains opened with her at center stage.  She smiled out at the crowd like she didn’t have a shrimp dicked, cheating dirtbag in the tip of her point shoe. Revenge was never so sweet!  Just like that, she was standing on pointe, squishing the sorry little asshole under her big toe.  All of her weight was on his legs as he tried to grip the side and pull away.  Feeling his struggle, she spun as hard as she could, leaving him gasping for mercy.  No one heard him over the roaring of the cello.

She felt the disgusting little termite try to crawl away with each twist and turn, but she didn’t care if he suffered.  He had made her suffer from his cruel adultery.  She gave the crowd one last spin before she bowed and walked off the stage.

There was no rush to get back to her room, but she was wondering about the state of her ex.  Had he been entirely smooshed against her shoe?  Was he alive? You know you want to know. Call me for giantess phone sex now or read more dirty blogs here!