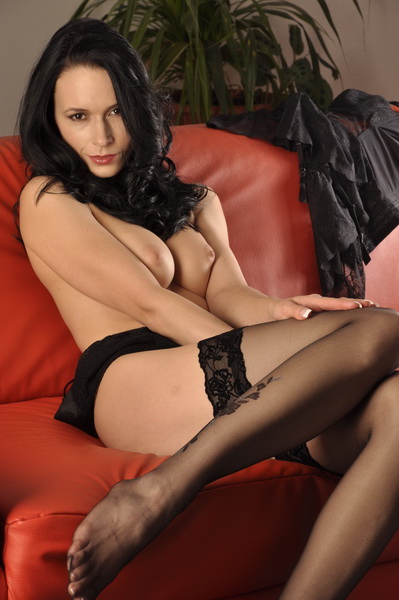 My friend Jessica hosted a sex toy party at her apartment the other night.  She invited about eight of her friends, served margaritas and we were having a great time when suddenly her front door opened and her boyfriend Jason walked in.

“Babe!  I told you to stay away until midnight, remember?” she said to him as he kicked his shoes off by the front door.

“I started getting bored at the sports bar.” Jason replied.  “Sorry for intruding.”

Jessica was pretty drunk by this time so she patted the empty spot next to her on the couch and invited him to come over and sit.  He laughed a bit uncomfortably, saying he didn’t want to invade our party.

“Sure you do!” I said and the rest of the women chimed in as well, all of them inviting him to sit with us.  He made his way over to sit with Jessica and she kissed him.

“Want to see what we all bought?” she asked slyly.

“Strawberry!” he said.  “These are really for me, you know.”

“Why don’t you try them?  Don’t you want to taste them?” I suggested.  He began to bring the panties up to his lips to sample the flavor but I put my hand on his arm to stop him.  “The point of edible undies, Jason, is to eat them off of a girl.”

“Yes!” Jessica laughed and grabbed her edible undies from Jason’s hands.  She pulled off her regular panties and slipped on the edibles.  She kept her skirt raised over her hips so that we could all get a look at her wearing the strawberry flavored crotchless panties.   Jason’s eyes widened as Jessica leaned back on the couch and spread her legs apart.

“Come on, Jason.” she said as she pulled open the panties, revealing more of her pussy.  “Eat up.”

He only hesitated a second before he got on his knees and buried his face between her legs.  He licked the panties and nibbled on them and we watched in silence as his tongue traveled from panties to pussy lips and back again.  Jessica began to moan loudly and put her hands on the back of his head, pulling him closer.

Patricia, a tall brunette, undid Jason’s pants and pulled them down his legs.  She held onto his stiff cock, giving it a few pulls with her hand before she got her vibrating cock ring out and slipped it over his shaft.  He moaned as he felt the vibrations and moved his head around as he continued to munch on the panties and the pussy.  Patricia lay on the floor in front of Jason, lifted her head and started to suck on his thick balls as the ring vibrated around his throbbing rod.

Jason let out a loud grunt and released his load all over Patricia’s face just as Jessica was creaming on his tongue.   As we all cleaned up and packed out toys away, Jason asked when the next sex toy party was going to be.  I must admit, I was wondering the same thing!