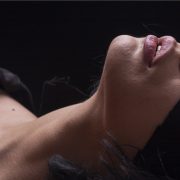 Am I a sensual bondage lesbian? My lady friend says yes.

Sometimes, you have to acknowledge things about yourself, like how I am a sensual bondage lesbian. Despite how I often like to be in charge, sometimes I just want to be teased and taken care of. And my partner, Mira, decided one day that she would help me acknowledge this idea.

“Sensual bondage isn’t about pain or hurt. It’s about making you feel pleasure, and the vulnerability in that,” she told me one day, from her vantage point between my breasts. Then, she moved back to sucking on one of my nipples.

“Fine. You can do it,” I agreed. Though, admittedly, part of me agreed to the event mostly because her fingers were around my clit. And when there’s a warm tongue on your nipple and trimmed fingers on your clit, orgasm happens. Really, I’m not a superhuman who can think through orgasm (as many of you already know!)

I expected that in the next couple of days, Mira would ask for my hands and tie them with twine or handcuffs. But Mira was more of a sensual bondage lesbian than handcuffs allowed. So when I woke up the next morning, she surprised me.

Mira was always one for finery. When I woke up the next morning, her head was already between my legs. Her hot breath felt good against my pussy, and I opened my legs wider. Only, I realized, I couldn’t move my legs.

Nor could I move my arms. I tugged on them to move to her hair. However, something held my hands back. I turned my eyes over to my right hand. Mira had wrapped my arms up in red, silk ribbon and tied me to the headstand. My legs seemed tied up with the same.

“Morning, sleepyhead,” she murmured against my thigh, giving me a kiss. “So, I’m going to prove you’re a sensual bondage lesbian, darling.” I squirmed underneath her hot breath, my pussy already wet from her earlier ministrations while I was sleeping.

“I didn’t mean the next morning,” I hissed. In response, she moved her lips back down to my hole. When my legs didn’t move enough (my hips can only gyrate so much on their own), my voice started leaking out more than I’d anticipated. I began gasping and mewling as she continued her soft, gentle licks around my hole. She teased as I clenched around nothing. I continued to squirm to no avail, and finally, as she sucked on the tip of my hole, her warm tongue inside me, I came.

Then, they pressed down.

“How many orgasms can I give you, though?” With a wave of her head, she flicked her hair on behind her back. “That’s what this is about, Elise, sweetie.” She smiled sweetly at me while she pressed another finger in. “Doesn’t it feel good like this? My fingers inside you?”

And it did, damn her. I couldn’t move, I couldn’t push the pleasure away from me. I could only lay there and revel in the intrusion. Even so, I strained against the silk ribbons as she smiled again. Then, she moved her head down to my labia– if you’ve seen them, you know I’ve got long ones. I’m a long labia girl, after all. She had a lot to suck and kiss. Yet with her fingers inside me, and her mouth, her warm, delicious, wet mouth finally on my clit– I came a second time.

“That’s a good girl.” Mira smiled as she wrapped a ribbon around my eyes. “Now then. No seeing. Just feeling.”

“Mira,” I begged, but she kissed me. I could taste myself in her mouth, and she plundered mine. As we kissed her hands were off me, but soon I heard something snap, like a button, and then her hands were back on me again. She felt up my back and kissed my neck, moving down to my breasts and my stomach. “You’re so wild, Elise,” she told me. “I wanted a sultry, sensual bondage lesbian, but you’re like a cat in heat! It’s like you need to be fucked again!”

I did need it. I needed it badly. “Please, Mira,” I begged again, this time for something else. As her teeth clamped down on a nipple, something hard and solid began to press inside my hole. Her strap-on, I realized. She held onto my hips as she giggled. “A whole world of pleasure, Elise,” she whispered in my ear, and then she really let herself go wild.

Want to have some sensual phone sex chat of our own? Then hit me up!