Calling Upon My Favorite Little Freshie in a Second Hazefest! 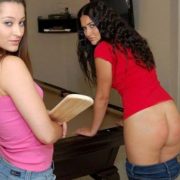 I wanted a second hazefest with my little freshie bitch, after deeply enjoying the first.

This second hazefest was not so much me retrieving her as it was her asking to get used. Perhaps I had grown too lenient as I was sweet on her. She began testing me. Mouthing off, which I found cute, but not in front of the other girls. It undermined my authority to not only the girls rushing but to my own senior peers. This was an issue as we are not particularly supposed to sexually fraternize with the girls who rushed. This meant that I had to make an example of her to the other girls. We attended a party, where for the first hour, all the freshmen walked around the party with an appetizer plate and offered them to people.

They also had to wear a uniform of a short white skirt and a pink blouse that said slut across it. She walked out and grabbed a serving tray. Another freshie notified me that she was not wearing her assigned shirt. It occurred in front of the other sisters, so mandatory punishment followed. But, one of our rules is that you don’t snitch on a sister. I called over my little freshie and the one who snitched on her. In front of the party, I demanded they both kneel in front of me. I knelt to their level and got in their faces one at a time. I told the snitching pledge that she was to receive a paddling for betraying girl code.

Then, I told the disobedient pledge that she awaited a paddling as an example to all those wishing to push their luck.

On their hands and knees, they anticipated their beating. Their bare asses and panties were visible with the length of the skirts. The perfect frame for a spanking. They each received a paddling of twenty. I took my little pledge and Another girl took the snitch. Everyone turned in the room as I lit into my little pledge. At about ten, with her ass all red and swollen, I left. I returned with the pledge uniform. I laid the shirt on the floor in front of her and rubbed her face in it like a dog. Then, I proceeded to give her the other ten swats, with extra enthusiasm. Then, I told everyone that we were going to have a private little talk. Everyone seemed quite surprised that I was not done with her yet, because I really went after her.

As she rose, I grabbed her by the hair and led her into my bedroom. I instructed her to place her hands on the edge of the bed. By this time, she seemed so terrified, she practically shook. I examined and lightly touched her red, swollen ass. Then, I laid out the shirt and instructed her to strip down, because now, she must wear nothing but that for me. She began. Slower, I told her. I was all turned on from this second hazefest. I found her irresistible. Then, I laid out on the bed and made her watch me play with my pussy while she stripped real slow. Once she had the shirt on, I instructed her to touch her nose to the bed and stretch her palms flat and over her head.

She did so quite slowly.

Poor thing expected a hard paddling again. What was coming, still wasn’t much better, haha. She tried to catch a glimpse of what I was doing, but I shouted at her, “nose, to the bed, pledge!” She did as she was told. I gave her my wand and told her to touch herself with it while I stood behind her. Once my strap-on was completely harnessed, I used my feet to scoot her legs as wide apart as possible. With my feet holding her feet and legs apart, she remained trapped. I slid my strap on into her tight little ass. Nice and slow, I felt shock travel through her body as I inched into her. She gasped, and I held her firmly by her hair for reassurance. She continued with the vibrator.

I fucked her in long slow strokes while rubbing my clit. As she came, her tight little ass squeezed up on the strap-on. Finally, I tipped over the edge. I pulled out and told her she was a good little slut. I made her dress back up and went out to the party after this second hazefest. Only she knew what our private little talk consisted of.

For hot phone sex, give me a call!  Read more of my blogs for my little hazefest!