Singling Out a Very Special Girl for Myself in a Little Hazefest! 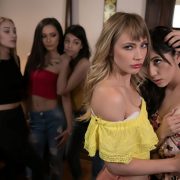 I had my own little hazefest with one of the girls rushing for my sorority.

Nowadays, that stuff is really frowned upon, so I went to great extents to keep my little hazefest a secret. Don’t get me wrong; all of the fresh meat girls were hot to me. Rarely does a girl rush if she is fugly. Every now and then, you get a couple of those girls, who make the entire group look bad, like a zit hitching a ride on the face of the rest of us. This girl met all the criteria. She was fit, had perky tits, had soft and clean hair, smelled like expensive perfume, and was well dressed. In addition to this, she fit the part of fresh meat so well! Often, with our hazing techniques, the older girls were met with some aspect of resistance.

She seemed to be along for the ride. Don’t get me wrong; she was sassy as fuck. In the end, though, she always did as she was told. I found her to be particularly pet-like. The way she turned red when I got in her face turned me on. I desperately wanted to see how far I could make her go for me. I wanted to get her alone. So, I found an excuse to single her out. She was to put on a cute little maid’s costume that I picked out for her. Nice and short. Then, she was to report to my bedroom for some work. I made sure that she had no studying to do, as I planned to have her to myself the entire night. No doubt, many eyes were on her the whole walk to my room.

I finished my work just as I heard a knock on my door.

I ordered her to enter and close the door behind her. She stood in the middle of my room with her hands laced behind her back, awaiting instruction. I stood and circled her, taking every inch of her in. Her sexy little waist, entirely exposed by the outfit. Her tight thighs and ass were peeking out from under the skirt I forced her to wear. I felt her grow excited. I ordered her to hold out her hand. Then, I handed her a toothbrush and hooked my fingers in the waistband of her skirt. I led her into the bathroom and told her to kneel. Then, I pulled a bucket of bleach out from the cabinets and set it on the floor. I said nothing more to her than the word scrub.

She set to work like a good little freshie. I pulled up my desk chair and sat in the opening of the bathroom the entire time. She scrubbed with such fervor, entirely silent. She seemed like she might collapse, not from exhaustion, our bathroom was not that big, but from the pressure of me watching. Sure I expected a good job, but I mostly wanted to stare at her in that outfit on her hands and knees. She squirmed so much beneath my gaze, and I lapped up every bit of it. After an hour, the floor was spotless. I told her she was like my cinderella, and I brushed her cheek with my hand, forcing her to look me in the eyes.

Then, I spat on the floor, testing her willingness to please me.

For fetish phone sex, give me a call! Read more of my blogs for bound beatings!