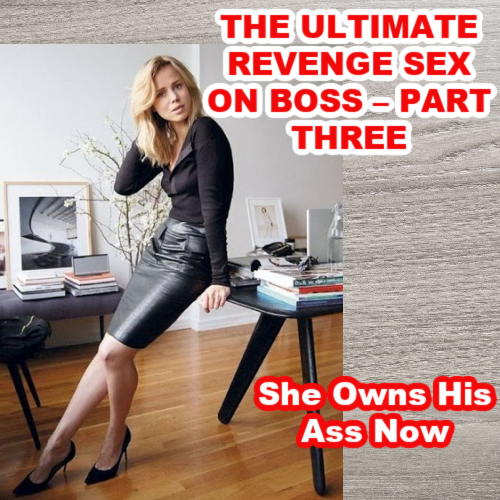 Bruce entered my office fuming about everything  I had taken from him with my revenge sex, and he wanted a comeback.  Poor Bruce would be lost in this anger forever, as speaking with me would never iron out the kinks in his armor.  I looked up at him from my desk, a devious grin on my face, and remembering every little thing I took from him: His wife, his career, his clients.  All mine and done up better than he could ever do himself.  I was skyrocketing to the top of the city’s galleries while he had to shut his down.

Unsure of how this revenge sex story started?

“Fine,  I fucked you over.  Can we settle this?”  Bruce’s voice was ridged, and his hands shoved so deeply in his pockets that I worried he might rip right through them.  Of course, I was amused by the redness in his face and the vein in his temple.  I had struck more than a nerve; I had shut him down.

“And what exactly were you thinking?”  I was toying with him, of course.  It would never be settled.  Not until he actually felt guilt and self-hatred.  Something I was pretty sure he was incapable of feeling.  He was a piece of shit, and I had flushed him so far away his inner circle dissipated, and he was left to scavenge on his own. My sexy vengeance had more than done its deed.

Did I go back on my word?  Absolutely.  I learned that lesson from him.

He started muttering about writing checks and buying my business.  The sums were hefty, but none of that mattered. My revenge sex was all that did matter.  He was going on and on about compensation for the damage he did, as if he really understands anything but his own feelings. I raise my hand to stop him mid sentence, because all of this rambling and the only thing he cared about was taking control of my business.

“What about your wife?”  I asked, knowing I would really get him seething.  His goody two-shoe wife, my proper secretary slut.  Her arms, chest, and legs were covered in tattoos, something Bruce hated, and I knew that was enough to ruin her for him.  Oh, but then there were the sex tapes I made.  Well, that was fun to send him.  Four gallery artists fucking his wife in every hole.  She was screaming that she had never felt so full.  Knowing that chode of his couldn’t satisfy a chipmunk.

“I’ll tell you what. Take off that shirt, snap-on these nipple clamps, and record yourself admitting that you’re a nasty little fuck who takes advantage of women.”

The defiance in his eyes was brilliant and livid.  “Why would I do that?”

“Leverage… In case you go back on your word.”

The following Monday, Bruce came into my office wearing a fresh suit and a million-dollar smile, but it dissipated at the sight of my best sexy vengeance conquest.  There was his wife sitting on my desk wearing the shortest secretary skirt and her new ink peeking from under her pantyhose.  Once a prime socialite turned office skank, she no longer was the woman he married.

It didn’t take long for Bruce to start asking questions, and of course, I had the very answer he was seeking, though not wanting.  Did I go back on my word?  Absolutely.  I learned that lesson from him.  With that, he had two options: join his wife as an office slut or never show his face around me again.  Any other choice and he would make would result in his little video going viral.  He wouldn’t want that, would he?

What choice would you make?  Call me for a phone sex roleplay, today!