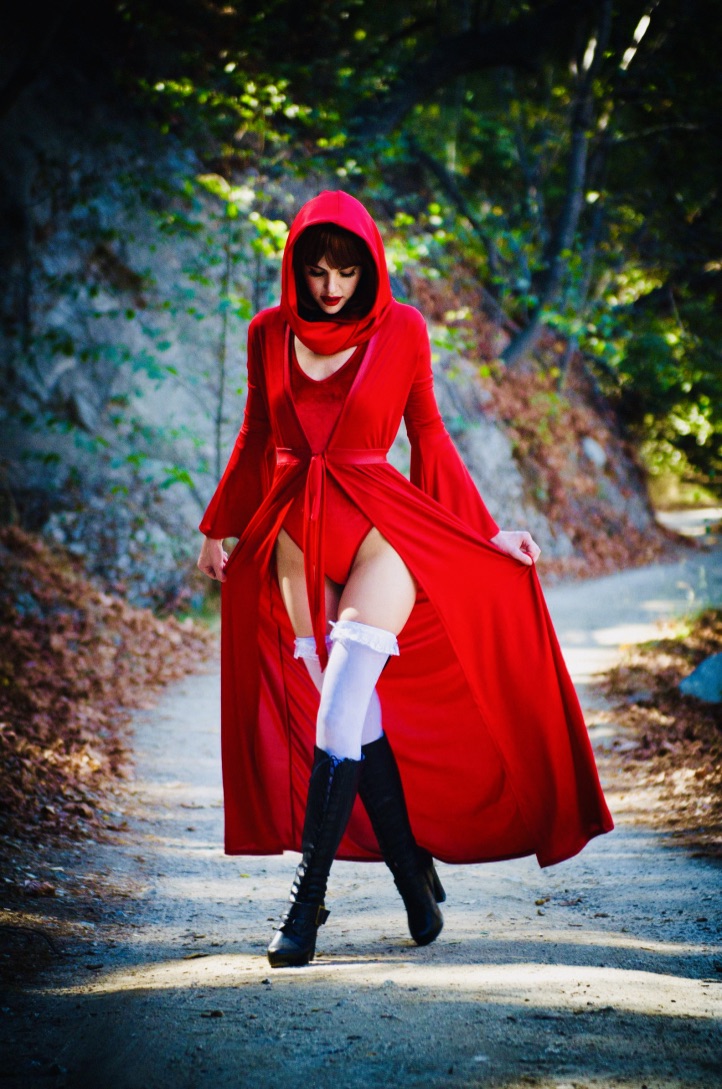 Deceived and trapped by Mr. big bad Wolf, she almost didn’t make it.  Now a grown woman,  she’s decided to take back what’s hers and give him what he’s got coming. First thing is first, she’s got to set her trap. Good thing she’s got the perfect one right between her legs, not to mention the two up top. Talking to strangers wasn’t always her specialty, but she’s much more careful these days.  Red Riding Hood learned her lesson the first time, unfortunately for Mr. Wolf, he won’t get another chance.

Red Riding Hood set up shop in the forest.

She found a nice meadow to lay her herself down on her red velvet blanket. A little sunbathing on a hot summer day is just what will do the trick. She pulled off her red cloak, exposing her curvy body in a hot pink bikini. Oiled and ready for the sun to soak in, she knew her scent would be picked up by Wolf at any moment.  She knew he would be around, working at the lumber yard nearby. And just like that, the long blades of grass started to part from a distance at a rapid pace as the sound of heavy panting began to grow closer until he stood above her.

He looked down at her with his heart beating fast.

He managed to lick his chops before saying… “Red riding hood, what big breasts you have? “She replied by saying “The more to feed you with my dear. You must be very hungry by now.” She stared up at Wolf while beginning to untie her bikini top, exposing her large milky tits. First, Wolf’s tongue rolled out longer, and then his eyes widened. She began to smirk and sit up a little, enticing him to come closer.

Wolf kneeled before her, his 5′ o clock shadow growing darker by the second, He smiled and said, ” Red Riding Hood, what juicy lips you have.” Sassy and sexy, she responded by saying ” The more to suck you with my dear…” Wolf nearly collapsed as he tried to gasp for air. “Who was this seductress tempting him in the meadow?” He thought to himself. “How do I get myself inside her?” His cock began to protrude out of his jeans, ready to pounce on Red Riding Hood as soon as she said when.

She began to untie her bikini bottoms.

Her legs open, Wolf drooled over himself while he looked at Red’s sweet pink. Glistening and ready for his big bad cock, at least so he thought. Out from behind the bushes came 4 black coats. They were tall and strong and had big hard black cocks that made Wolf’s look like a joke. Wolf confused and startled, got up quickly and said “But, but, what…” And Red Riding Hood looked at Wolf as she stood before him and said “What? What is it? You mean, what big cocks you have?” The Wolf tried to swallow the lump in his throat. The black coats surrounded him and Red said ” The more to fuck you with, bitch.”

And catch up on some sexy reading with Fragrant Pink Flowers