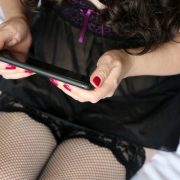 So I heard there are some places to get your fantasy on via real-time MMO ERP.

The hardest choice was being either a bunny girl or a catgirl. Both of them are cute, right? And both of them felt sexy– though I ended up being a bunny simply because her starting outfit was a little more revealing. I mean, her ass practically hangs out of her sexy starter outfit. Who doesn’t want to put their face between her cheeks? (I include myself in that).

And once I had set up my character, all that was left was to find a few partners willing to engage in real-time MMO ERP. I mean, I’m a pervert, and my friends in real life are perverts, but this felt like going to the city looking for a hookup. This was my first stumbling block because I didn’t know where I could go to find a partner. You can’t just ask an elf on the street, “Hey, wanna bang?”

Well, I guess I could have. But something tells me people who say those words are now banned!

Trying Out The ERP On My Own

But luckily, there are places you can read for personals in these games. People post asking for cute bunny girlfriends. Sometimes, players would meet in dark alleys late at night– just like real life! It felt sketchy, but the whole time, fun.

I met Gravandar, an orc, my first night in the dark alley. He and I both had roleplay, and he began by asking me how much? I told him, and he told me to follow him– he took us to his house, and we layed on his bed. Though that would never happen in the real world, I loved the freedom of being able to fuck who I wanted, and what I wanted.

Plus, imagining that orc cock inside me? Hells yes.

A lot of our ERP was done through chat and emoting. I started by having my character kneel in front of him, and describe how she was taking off his pants. She put his cock in her mouth, and I let my partner describe the cock. He then wanted me to ride him, and so he lay on the bed. With some maneuvering, my model got on top of him, sitting as if she were straddling his cock. Immediately he fucked into her pussy, giving her a pussy pounded roughly enough that she could barely breathe.

Honestly, it felt a lot like phone sex– except I could act and see what was going on. I only wish I could have heard my partner, as that’s my favorite part!

Since not many clients wander around at night, for my real-time MMO ERP experiment, I decided to hook up with a brothel. Now, they’re not really called brothels, but bathhouses or hotels. My pay was all done by the mistress of the brothel, who was really sweet and nice– she was more than happy to help me be a working lady. I even got my own room! Beds seemed too weird, so I made my room into a bath, with waterfalls and greenery, including a grass carpet.

My first client, then, was a dwarf. I took him back to my room. He wanted something a little more explicit than my orc client; he wanted to shove his fists inside my bunny pussy. We angled our characters as much as we could, but the majority of this was roleplay. He stretched out my pussy first with his hands, then managed both inside me. When he finished, my bunny tail shook and shook with the orgasms he was giving me. But, my pussy juices covered his arms!!

Real-time MMO ERP: so similar to phone sex, it hurts. No wonder I love it!

Come play with this phone sex operator! Give me fists of your own and leave my pussy wide!