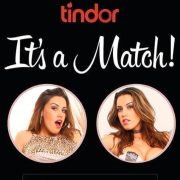 There are two options for me when I need my pussy pounded roughly. The first is heading out to a bar and finding a stranger to fuck me for the night. The only downside is if it’s too early or too late, I’m not going to find an instant hookup. The second is hooking up on Tinder, looking for somebody casual. Nowadays, so many people are looking for actually dating on Tinder, and men are surprised when I tell them I only want to be casual. Sorry, guys.

Tinder ended up working for me this time, though. A cutie messaged me on Tinder and asked if I wanted to hook up in a few hours. I sent him a wink, asking if it could be sooner.

When he didn’t reply, I went to Tumblr to read what Tumblr college girls said about the best lighting for a tit shot, then sent the tit shot, and sent the following text:

You’d better fuck my pussy so I can’t walk straight for two weeks, or else I’m fucking gone.

His response? Yes ma’am. Come on over.

I ran to my car and sped all the way to his place.

My nails pressed against his head as he shoved me down onto his cock, barely giving me any room to breathe. I hadn’t even undressed, but he whipped his cock out right there on the front door and shoved his cock in my mouth. My hair bobbed and my lipstick smeared as he face-fucked me. Yet, despite the tears in my eyes from lack of oxygen, I loved gagging on his cock.

After a few minutes of him skull-fucking me, he let up and pulled out. My head hurt from where he tugged on my hair, but that paled in comparison to where he grabbed my wrists- I had bruises for weeks- and dragged me to the bedroom. “Fuck yes,” I breathed while he tore my clothes off, jacking off quickly above me. I spread my legs open, and he dove right in.

His cock slammed into my pussy. He practically fell into it, that’s how harsh it was. The bed squeaked and hit the wall, but I didn’t care. Finally, someone was filling me the way I needed.

We were a mess of snapping hips, moans, and nail marks. Our mouths fought with each other as I surged against him, trying to take some control. In response, he rightly shoved me into my place, back on the bed. I’d move my legs against him, and he’d force them above my head. He gave me everything I needed by taking total control of the situation. He left marks on my neck and bruises on my hips, and left my pussy pounded roughly, exactly like I craved.

I came at least three times.

Do you think you could be even rougher?

Then you should call, and we’ll have the best phone sex!