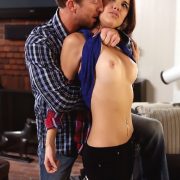 Many women have a rape fantasy when it comes to sex. It can be fun though when you turn the tables on the one that started it though. Make the perpetrator the victim when possible for maximum satisfaction. I babysit on the side for fairly easy money. I can often get caught up on paper work when the kids go to sleep. When the paperwork is all finished though, there’s other things one can do to fill the time. Like having company. I usually invite one of my many fuck buddies over and we can have a lot of fun. I’m actually getting paid for the time I’m fucking, and of course I could hear if the kids needed me.

I Was In For An Unpleasant Surprise

I have a high sex drive and no shortage of sex partners. So lots of times I will invite a different one over. I also play with girls on occasion as well as my male buddies. I enjoy variety. There’s never been any problems or anything. None of the parents ever seemed the wiser since my friends were gone by the time they returned. Imagine my shock when one night after they got home things quickly changed. The wife went up to bed and left the husband to pay me before I left. Nothing odd there. Then he whispered to me he’d had several cameras installed and he was wise to my activities. I was horrified.

I Had To Play His Game

He said he had recordings of all my fuck sessions for the last month. He’d be only too happy to pass them along to my boss and destroy me unless I agreed to fuck him. So I knew he wasn’t bluffing, he showed me a clip on his phone from a few weeks ago.  I said I’d do what he wanted and would never entertain there again. He said he liked rough sex, really rough. I was going to have to play out some rape fantasy of his to keep him silent. He clearly was also into blackmail sex. I said yes, let’s just get it over with. The following weekend his wife was taking the kids for the weekend to go visit her sister out of town. So that was it.

I Had To Get A Plan Together

I thought about this rape fantasy scenario all week. And I was going to have to participate in it to keep my job and reputation intact. I then came up with a little twist. I looked over and saw my purse, it had a colorful pattern on it. It also had a side pocket. If I slipped my phone in there and made a hole so the camera could look out, no one would see it. The design was busy, you wouldn’t notice a small hole. So  I could record the whole encounter and turn the tables.

I Wanted To “Capture” Our Sex

I went to their home after the wife and kids had left for the weekend. He looked at me like a starving man would view a steak. I set my bag down facing us on a nearby chair. He asked what I was doing since my back was towards him for a bit too long. I turned on the camera and made sure it was out the hole to capture it all. I said I was just looking for a condom. He said fuck that, there’s no condom tonight and he grabbed me. He threw me down on the sofa and I landed face first on it. I felt my clothes being ripped off. I looked right at the camera, he said to shut up and take it, bitch. He grabbed my hair and wrenched my neck back.

He Was So Fucking Rough!

After I got him I checked the recording of the events and it recorded it all perfectly. His face was clearly visible, as was mine. His words easily heard. I took a few screenshots and emailed them to him. I said if any recordings of me ever saw the light of day, I’d show his wife the recording. He was admittedly raping me in the recording, not a doubt. So you see, a rape fantasy can have unexpected consequences.

If you want taboo phone sex I am the girl to call!