Blackmail Sex; Getting Caught Playing with My Pussy 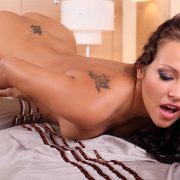 Blackmail sex can cover many different scenarios, one of which I found myself in recently.  It actually turned into a crazy sex story . I work for a wealthy man and like my job with his company. I also do phone sex to earn extra money. He was going out of town and asked if I’d house sit while he was away.

I thought this was a great opportunity to be able to enjoy his house and property. He has a gourmet kitchen to cook in, a lovely pool, he said to make myself at home. So I did. I thought I could log on for calls as it was quiet and I had lots of privacy. Or so I thought. I was talking to one of my favorite callers and he always turns me on so much. It didn’t take long before I was naked and touching myself when I heard him begin to pleasure himself.

He’d seen me buried up to the knuckles in my sopping wet cunt, teasing my stiff clit. That he’d be only too happy to show his father what I’d been up to while housesitting for him. I was freaking out. I could get fired if he did this. He was a good looking guy, and it infuriated me he was acting this way. I considered saying I’d just walk away from the job and be done with it. I thought if I acted all scared and like he was in control, he might try and bargain to have sex. Then he’d keep quiet about it all.

He Thought I Was Afraid Of Being Blackmailed

So he thought it was blackmail sex, but really I wanted to fuck him, so let him think that. I begged him not to tell, that I’d do whatever he wanted. I knew I was going to get his cock, which was what I wanted all along. He told me to get on my knees and take his dick in my mouth. I licked up and down his hard shaft and teased it, lapping at the tip. I cupped his balls in my hand and felt the weight of them, so filled with his cum. He grabbed me by the hair and pushed the length of himself down my throat, gagging me. I relaxed my throat and let him throat fuck me until he came down my throat.

He Was In side Me Balls Deep

He remained hard even after he shot his load, already wanting to go for round two. Then he told me to get on all fours on the bed and he came in from behind me. I could feel the huge head of his cock burying itself between my still wet cunt lips.. I could feel him thrust into me in one fell swoop. He was up to his balls in my wet pussy. Grabbing me by the hips and pulling me hard back onto his cock with great force to meet his thrusts.

I Was Squeezing his thick Shaft With My Pussy Muscles