PUSSY GALORE II – MILES AHEAD OF THE BOND GIRL! 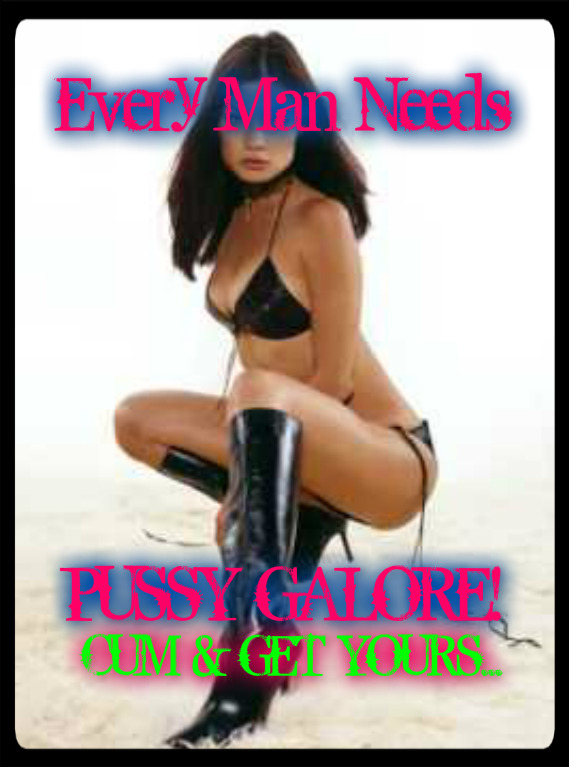 PUSSY GALORE II – MILES AHEAD OF THE BOND GIRL!

Pussy! Yes. We’ve ALL heard of, PUSSY GALORE – THE BOND GIRL. But, how about her descendant, Joey…Pussy Galore II? NO?  Also a Bond Girl, with a twist…She is the only known woman of the twenty-first century to head a major cat burglar ring.  The ring is, of course, a lesbian troupe of former acrobats; befitting the new job, eh? After being sexually abused as a child, Joey turned to women for comfort and warmth.
And what better way to get those, but through a dripping, sloppy-wet pussy? Well, okay…through an equally warm, ass.  Licking butt-holes was also her sexy thing. She liked men alright, but her truest happiness came from the “deliverance” of her male slaves via her cock shoved deep inside their squirming asses. You REALLY need to know more, don’t cha? Giggle.

Pussy and her girls were hired for a sensitive job by another major crime boss, Big Finger. No one knew why he had the nickname, but, one can surmise…LOL.  The scheme involved the killing of officers guarding the Pussy Dome in NOLA. Pussy was cumpletely against out-and-out murder…But, she and her girls really had no CUMpunction against killing off a man, or four via their sweet pussified talents!

Entering the grounds of the compound, she spied the underground caverns just outside the regular entrance to the dome.

From there, they made their way to the private quarters of Major General Dickson. He and his three underlings lived full time at the Pussy Dome and should be asleep by this early morning hour. And making their way down the lengthy corridors, proved that theory wrong…Murphy’s Law is ALWAYS around, when you need him LEAST!

“Remember the old days when this sound was a constant for us, girls?” She said with a dark grin.

The girls returned the grin with their own…A silent nod…and they moved forward into the living quarters. Pussy and the girls stood at the foot of a humongous bed and she lightly cleared her throat to the sounds of her girl’s giggles. The men stopped their activity in unison. Their eyes were immediately transfixed by the vision of the new women in the room. Pussy locked eyes with each woman on the bed in turn and gave a slight jerk of her head over the shoulder.

They scrambled like rats when lights are turned on.

The men didn’t seem to care much.  They lay now like some giant man orgy and smiled at Pussy..Didn’t every man? Haha.  Pussy Galore was first to land on the bed and immediately TOOK all four men to her body. They licked her nipples, pussy and ass and she gave that knowing look to the girls…They ascended on the men and force fucked them, deep throated and gave the best CBT in the world.  Before long, the men fell cumpletely silent. They’d done what they were hired to do…Maybe a little too well.  They were happily sated…dead, but happy. Haha.

Pussy called for the “cleanup squad”and headed for Big Finger’s private jet for their getaway to Monaco.  Once aboard and ready to take off, the sirens rang out. The Fed boarded and cuffed Pussy and the girls as Big Finger stood by smirking.  She’d been set up! Reason number one MILLION to turn lesbo…Giggle.  Men will FUCK you every chance they get!

Especially if you’ve got the goods…like Pussy Galore does!

It is hinted at that after Pussy and the girls went to prison, that she said to her old nemesis, Bond, “Will you write to me in Sing Sing?” Wonder if he ever did…

Want to know the skinny on their planned escape? Or, ride of with me on a Pleasure trip! Call me and get the sexy lowdown…plus more.  Don’t you want some of this PUSSY?